How Big Are Costco Cakes? 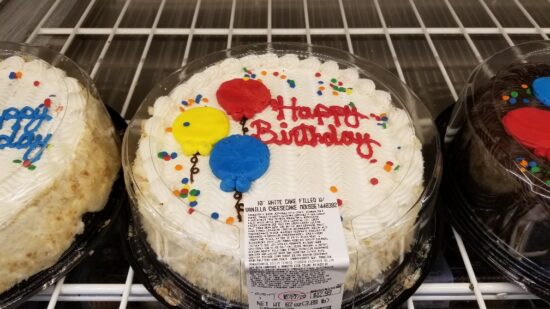 Costco is known for bulk packages and great deals. If you mention the bakery to any Costco fan, they’ll likely gush about their famous sheet cakes. If you haven’t heard about them, here’s everything you need to know about their cakes, including Costco cake size.

In June of 2020 it was rumored Costco stopped making their famous sheet cakes. Due to the COVID-19 pandemic, large gatherings aren’t happening causing demand to fall for the dessert designed to feed a crowd.

However, within weeks reports popped up suggesting the cakes were beginning to reappear. Checking with my local Costco, the cakes are not available pre-made for immediate purchase from coolers in the bakery department as they once were. However, you can order the cake to be made specifically for you.

What is the Costco Cake Size?

A Costco sheet cake is actually a half sheet cake measuring 12 inches by 16 inches. It can be cut into approximately 48 pieces measuring two inches square.

How Much Does A Costco Sheet Cake Cost?

What Varieties Are Available?

The combination of the size of the cake and the dirt cheap price is what makes the Costco sheet cake special. The cake weighs in at over 9 pounds, with over 2 of those pounds being the interior mousse layer. Also, the cakes are delicious.

The cakes come in a variety of different styles, and you can request to have it customized with the lettering of your choice. Ordering the cake is also a breeze. Simply fill out an order sheet indicating the style, desired lettering, time you need it, and drop it in the order slot.

Costco also offers a smaller 10 inch round cake for smaller gatherings. While the cake is equally delicious, it’s not quite as good of a deal. These cakes cost $12.99 and will feed 8-10 people.

Costco cakes are almost legendary. Between the Costco cake size, and it’s price it’s one of the best deals around for getting a celebratory cake for a large gathering.