Costco liquor prices include savings of up to 39% over Trader Joe’s and up to 28% compared to local liquor stores. 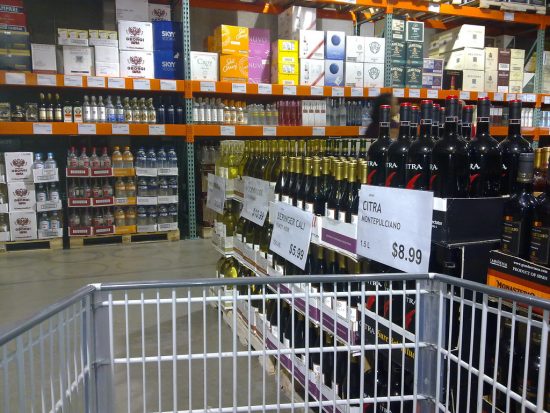 However, Costco liquor prices are almost identical to those at Sam’s Club. More details on the differences

Here comes a detailed price comparison of popular beer brands available at Costco, Sam’s Club, and a local liquor store in Rochester, MN (about an hour south of the Twin Cities).

Note that alcohol prices can vary depending on regional inflation, but you can calculate how much higher or lower prices may be in your area by using a cost of living calculator.

Next up: prices of popular hard liquor brands at Costco, Sam’s Club, and the same local liquor store. Plus, the following comparison includes  Trader Joe’s, which does not sell the most popular beer brands but does sell hard liquor.

As you can see in the two charts above, the prices varied by only a few cents between Costco and Sam’s Club. However, Costco liquor prices were between 20% (Bud Light and Michelob Light) to 28% (Jack Daniel’s) lower than a local liquor store, and between 27% (Jameson) and 39% (Captain Morgan) lower than Trader Joe’s.

Readers, where do you prefer to purchase alcohol and what kind of prices do you pay for it?