Frugality • What Would You Do?

Would You Help a Stranger Save Money? 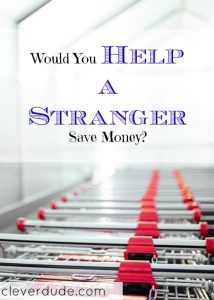 I’m not the kind of person who would approach and talk to a total stranger unless absolutely necessary, especially in the grocery store. But this gentleman obviously was.

My wife and I were grocery shopping with calculator in hand to keep a running total of the cost of the groceries we were putting into our cart. We were in the produce section picking the fruits and vegetables for the week, weighing each item and calculating their cost. I was weighing some tomatoes when the man walked by me, looked down at my calculator and smiled at me. A few minutes later, I was back at the scale with bananas and he happened to walk by again.

â€œIf you have the time, they’re half the price at the convenience store next door,â€ he said.

While the saving only amounted to about a dollar, I appreciated his effort and willingness to help me save some money. Obviously the guy saw us keeping track of how much we were spending, and thought he would try to help us out.

It got me thinking, what if we all did things like this a little more often?

Imagine standing in the soda isle trying to decide whether a 12 pack of your favorite root beer is worth $3.99 when someone walks by and tells you that it’s on sale for half that at a nearby grocery store that you were heading to next anyway. Or what if you at the meat counter contemplating some fresh steaks when someone walked by suggesting you go to the local store on 5th street that was running a killer sale, and their meat was better quality?

What do you think, clever friends, do you share info on better prices with strangers in the grocery store?