Why Do I Need A Computer Chip On My Debit/Credit Card? 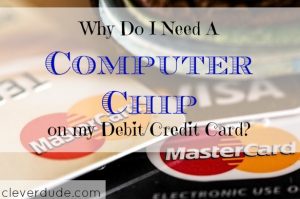 I recently received a new debit card in the mail, as the one I had been using for the last few years was set to expire soon. This one looked a little different, as it had a small metallic chip embedded within the card. I had heard that card issuers were moving to a new technology that would include having a small computer chip on each card. However, I didn’t know why having such a chip on my card was better, or what it meant for me as a consumer.

The new cards are called EMV cards which stands for Europay, Mastercard and Visa. This technology is already in widespread use in Europe. In fact, you may have difficulties using your non-EMV card if you travel across the pond. The point of the new technology is to reduce credit card fraud which affects not only customers, but also merchants as well.

How Do EMV Cards Work?

When a traditional magnetic strip only card is issued, information is encoded into the magnetic strip that is swiped and read for each transaction. That information never changes, making it relatively easy to counterfeit. The computer chip on an EMV card generates a transaction ID each time it is used that can never be used again. This makes an EMV card more difficult to counterfeit.

What Does This Mean For Me?

Using an EMV card requires merchants to buy new equipment. The end game is to have terminals that require consumers to push the end of the card with the chip into the reader. Then, the consumer would enter their PIN number to authorize the transaction.

However, replacing all the current magnetic strip readers is an expensive proposition for merchants. Therefore, the first wave of EMV cards will be dual purpose meaning they will have the computer chip as well as a swipe-able magnetic strip.

Who is Responsible if Fraud Does Occur?

As of October, 2015, the responsibility in the case of fraud changes with respect to EMV cards. With magnetic strip cards, merchants can avoid responsibility simply by requiring a signature with a credit card. But with EMV cards, the responsibility falls with the party that is less EMV ready. If a card issuer provides a consumer with an EMV ready card, but fraud occurs at a merchant that has not switched to EMV technology, the merchant will be responsible for the cost of the fraud.

How Common Is EMV Technology?

It’s estimated that 120 million (or more) Americans already have EMV cards in their wallets and purses. Personally, less than half of my credit/debit cards have the EMV chip. Additionally, I’ve encountered exactly TWO merchants that have an ENV card reader.

Use of the ENV smart chip technology isn’t widespread in the US yet.  However, if your current debit or credit card doesn’t have the chip now, when it expires your next one likely will. More and more merchants will be installing ENV readers.  The technology is coming, at least now I know what it is, why it’s being changed, and what it means for me as a consumer.