What’s Your Most Inexpensive Meal? 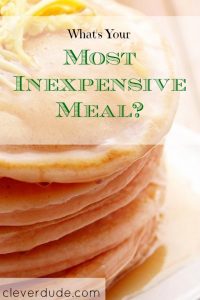 Over the Thanksgiving break, my house was overrun by a gang of high school freshman. My son and a bunch of his friends went to a movie, and then came back to our house to hang out, sleep over, and play video games until the early morning hours.

My first thought in the morning was what I could feed them when I was faced with the standard teenager morning grunt of, â€œFood.â€ I knew that when they did finally wake up and emerge from our basement they would want something fast, and since there were ten of them I wanted it to be relatively inexpensive. The perfect thing instantly popped into my head.

I’m not talking about just regular pancakes, I was going to give them options.

After a dizzying half an hour the teenager tornado receded back into the basement for more video games, and then one by one they were picked up by their parents.

Here’s the damage for the pancake breakfast:

*Note: I had the cinnamon in my cupboard so I didn’t add any expense for that

I fed twelve people (ten teenagers plus myself and my wife) for $7.19, which comes to just under 60 cents per person. As an added bonus, my son hung out with some of the same friends a couple of days later and they were all talking about how awesome my pancakes were.

I’d call that a success at every level.

What’s your favorite inexpensive meal? How much does it cost?