What’s Your Definition Of Financial Freedom? 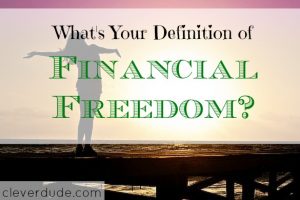 I’m a huge fan of motivational quotes. I saw one on Friday morning that I couldn’t quite get my arms around at the time. I don’t remember the exact words, but essentially it stated the goal, or at least one of the benefits of financial freedom, was to forget that today was payday. At the time I just cocked my head and thought, â€œYeah, right. How can a person forget it’s payday?â€

A few hours later, the point was driven home.

My son came down the stairs, a grin spread wide across his face, walked up to me and said, â€œI didn’t know today was payday.â€

His checking account balance was just over $100 Thursday evening, and then a nice sized paycheck from his part time job hit his account Friday morning. He had barely spent any money in over a week. With the excitement of Christmas and the New Year, he had lost track of the last time he got paid. He had curbed his spending thinking he had to make his money last another week.

It didn’t matter that it was payday because he had plenty of funds in his checking account.

As most teenagers, my son doesn’t have a lot of financial responsibilities. A specific amount of each of his paychecks is automatically transferred to savings, the car he drives is owned by my wife and I, his car insurance has already been paid, and he had just filled the gas tank. His expenses were all paid, and the money in his account is for him to use for whatever he’d like. Yet, he chose to curb his spending and maintain a significant balance. He had enough funds to last him for quite some time.

Suddenly that quote I had heard earlier in the day resonated. Imagine your finances being in such such a state where your bills are so low and the funds you have in the bank are a big enough of a cushion such that it just flat out doesn’t matter when the next payday was. The funds in your account are all yours, to do with what you will. You can spend them as quickly, or as slowly as you wish.

That’s a perspective of financial freedom that I’ve never thought about before. To be able to wake up and find out at some point that a paycheck had been deposited and think to myself, â€œOh, that’s right, today was payday,â€ but knowing that even if it wasn’t my finances were just fine. That truly would be financial freedom.

What do you think of this perspective of financial freedom, Clever Friends?