Communication • What Would You Do?

What Would You Do: Planning A Party With Family..and NOT Talking about Finances 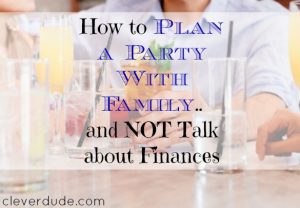 Lack of planning and communication about our finances is one of the reasons my wife and I were once headed down the wrong path. I thought we had learned something. Which is why the situation that is unfolding before me is so mind boggling.

My mother-in-law recently married her long time boyfriend in a very private ceremony.  In fact, it was so private that you can count on your fingers how many people were at the wedding. They didn’t want it to be a big deal.  There was no reception, no dance, and they made the news public after they had tied the knot.

Being able to surprise friends and family with news of their nuptials after years of saying they’d never marry was exactly what they wanted.

As the weeks went by and the news sunk in, a close member of the family decided he wanted to throw the couple a surprise reception later this summer. He recruited my wife to help plan it as she is known for her excellent party planning skills.  As I expected, my wife has essentially taken over, spending  hours planning every detail imaginable. She’s spent hours sitting at the dinner table, outside on the deck, and even during our son’s baseball game working the phone putting all the pieces of the puzzle together.

She and her brother have even talked about how much each our families would be able to contribute financially. After all, it is their mother’s reception and they naturally want to pitch in. They have also received commitments for donations from other members of the family. Together those donations will cover a large portion of the projected cost, but not all of it. Which leaves just one problem:  Nobody has talked about payment with the person who started planning the party.

What his intentions and expectations are regarding payment are completely unknown.

The bigger problem is that nobody is willing to talk to him about it. He unexpectedly has some life issues of his own to deal with. Which quite frankly is part of the reason my wife has taken it upon herself to do much of the planning. With what is going on in his life right now, they don’t want to saddle him with another worry. They want to let things settle down and have that conversation in a couple of weeks.

This seems like a disaster waiting to happen. We have a reception that is being planned in which everyone is agreeing about how much things will cost, but there isn’t a complete picture regarding how it’s going to be paid for. This certainly wouldn’t work in a household budget. Taking on new expenses without a plan to pay for them just doesn’t make any sense financially.

So my question to you, my readers, is what would you do?