What Would You Do? Money Left Behind in the Self Checkout Lane 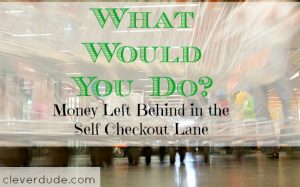 The subject matter I post here at CleverDude falls on the lighter side of personal finance, but today we’re going to tip the scale even a little further and have a little fun based upon an experience I had at Walmart over the weekend.

I’m a habitual self checkout lane junkie. When I only have a few items I make it a personal challenge to scan my items, pay for my purchase and pass the person that used the station before me on the way out the door. When I have a cart full of groceries I scan and pack my groceries with such efficiency that I frequently have people tell me I should work there.

On Saturday afternoon I rolled up to a self checkout station and began the process of scanning and bagging my items.  After I had filled a few bags,  I happened to glance downward and notice some money had been left behind in the change slot. $22 to be exact. It had been several minutes since the previous users had left, so they were nowhere to be found (not that I remembered what they looked like anyway).

Several options materialized in my brain as I continued to scan my items.

Obviously, the correct and moral option is #1. But the forces of evil were strong in Walmart that day as I was giving serious thought to taking the money.  They say the test of a man’s true character is what they do when nobody is looking. Fortunately for me on that day I didn’t have to test my character too much. I remembered that there are cameras everywhere within Walmart. If the rightful owners of the money came back they could watch the security cameras and see who took the money. I’m in Walmart almost everyday, and I’m almost positive I would be caught.

I stopped scanning my items and gave the money to the Walmart employee.

I would like to think that I would have eventually taken the same action regardless of whether I remembered the cameras recording the action within the store at every angle imaginable. But who knows, even people with strong character make mistakes.

If I ask what you would have done, everyone would invariably say they would have given the money to the employee. But I’m going to ask you a different question.

Is there any set of circumstances that WOULD lead you to have taken the money? Don’t be shy now, this is only a blog post for fun, nobody’s going to judge. 🙂