What The XBox Taught My Son About Personal Finance

A little over a year ago, my son decided that getting an Xbox was the most important thing in the world to him. My wife and I decided it was a great opportunity for him to learn the value of patience. and saving up for something. I told him that if he wanted one, he would have to save up and buy it himself.

He and I visited Game Stop many times over the course of several months to gather information, as well as to ogle at the object of his desire. We learned that he had three options to purchase an Xbox:

He had heard that the older models had a well known issue that could leave the Xbox useless, so he quickly set his sights on the $199 model. He didn’t think he needed the hard drive of the most expensive version as plenty of games could be stored on the 8GB of option #2. 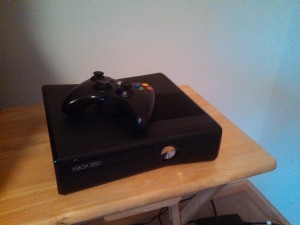 The day we were finally able to walk into Game Stop and purchase his Xbox was a big day for him as it was the largest purchase he had ever made. Unfortunately, after about six months, he came to the conclusion he had made a mistake.  His internal storage was filling up fast, and he started making comments about selling his Xbox, and upgrading.

He and I had a discussion regarding what his upgrade path looked like. I described it like this:

He really thought he’d be able to sell his Xbox for exactly what he had purchased it for. I pointed out to him that maybe we should have done a bit more research before making the purchase. If he followed the upgrade path, by the time he was done, he will pay more for the Xbox with the hard drive than the actual retail value.

He was visibly upset at the prospect of having made such a mistake, and the task of saving up another large amount of money to get the Xbox that really suited his needs.

I did some investigation and found we could purchase a hard drive to install in his current Xbox.

On a Sunday afternoon, we went looking to see how much such a hard drive would cost. The cheapest one we found was at Walmart for $50, and my son had just enough money in his wallet to buy it.  Driving home, I could see my son was deep in thought, and the mental wheels were turning. I was waiting for him to figure out something that occurred to me when we found the hard drive in the store. Finally, as we pulled into the driveway he said it:

â€œHey Dad, if I paid $199 for my Xbox, and $50 for my hard drive, isn’t that actually cheaper than just buying the upgraded model?â€

I smiled and replied, “Yep, it sure is!”

What I’m hoping my son took away from this experience is that knowledge is power when purchasing something.  By having to save up his own money, he had the time to research and discover that buying the used model wasn’t a great choice.   He did not however, fully understand that his type of use of an XBox would really require having the increased capacity of a hard drive.   It happened to work out great for him in this case, but having all the information about the models, the hard drive use, and that one could be added separately for less would have given him a clear plan to get the XBox setup he really wanted.

How about you readers, have you witnessed a child learning a great financial lesson recently?