What Has Happened to Human Interaction? 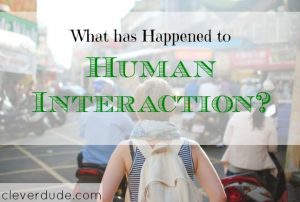 Life is busy with a never ending list of â€œto dos.â€ Between our jobs (maybe two), taxiing kids around, shopping, cleaning, cooking and trying to save a little money while doing all of it, there never seems to be enough time in a day. On top of it all, weâ€™re all tethered to our smart phones trying to catch a glimpse of notifications from Facebook or Twitter. Weâ€™ve been engrained with such a sense of political correctness and fear of offending someone that half of the things that come out of our mouths probably arenâ€™t even close to what we would really like to say.

Sometimes I wonder if weâ€™ve just flat out forgotten how to talk to each other.

Two recent experiences showed me how it should be done, and highlighted the fact that most of us have a lot to learn about how to talk to our fellow human beings. 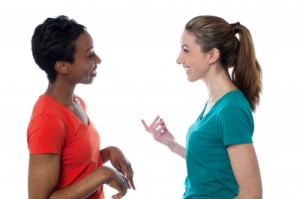 I was walking through the grocery store recently looking for ice cream toppings, but having a little trouble. I spotted an employee and asked for some assistance. This may not be a direct quote, but what she said was something like this:

â€œ Ooh, I could go for some ice cream right now, that sounds GREAT! I could walk with you and take you right to them if youâ€™d like, but if we turn and look down this main isle here, do you see that display all the way up against the far wall next to the flowers? Thatâ€™s where youâ€™ll find every possible ice cream topping youâ€™ll ever need.â€

She could have simply pointed and said, â€œover there, against the wall.â€ She could have beckoned me to follow her and taken me to the display. But what she said, and how she said it made me feel like I was a valued customer. She was talking to me as fellow person, and not just servicing a request.

Acquaintance At The Gym

I was finishing up my workout when a friend I hadnâ€™t seen in months spotted me as he came around the indoor track. He didnâ€™t just wave or give me the obligatory, â€œHello,â€ as he ran by. He threw off his headphones, stopped running, and thrusted a handshake at me.

â€œHow you doing, man?â€ He said excitedly with a huge smile on his face.

What happened next was a 10 minute conversation of him asking me questions. He asked how my job was going, how the family was, and what my son was up to these days. He couldnâ€™t of cared less about talking about what was going on in his life, he wanted to know about me.

I know weâ€™re all just trying to get through life the best we can, but since weâ€™re all here together, why not make it as easy and enjoyable for each other as possible?

Have you had a conversation with someone recently that just made you happy? How about the opposite?