What Apple and Car Salesmen Have In Common? 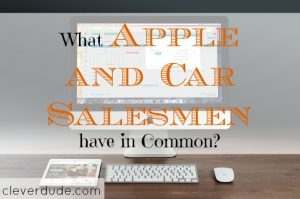 Last week Apple introduced an iPhone trade-in program which would allow current iPhone owners to get up to $280 for their current iPhone towards the purchase of a shiny new iPhone. It’s called the â€œreuse and recycleâ€ plan which a company spokesman touts as being good for the environment.

Let’s be honest, this has nothing to do with the environment or doing right by their customers and has everything to do with hype. The program was introduced ahead of the imminent release of the next generation iPhone, most likely in an attempt to generate the best sales numbers they can.

Let’s take a look at what has to be true for you to be able to trade-in your iPhone:

One would also have to assume that the better condition it is in, the more you’ll get for your iPhone. But, even if you get the maximum, customers will get around half of what they paid for their phone.

The target of this trade-in program is really the tech lover that must have the latest thing from Apple and likely just bought the iPhone 5 less than a year ago. Do they need a new phone? Nope, but they’re willing to burn the money on a new phone and having an easy way to dump their current phone detaches them from any residual reminder laying around that they may have just dropped some serious coin on an unnecessary upgrade. This group of people, and their sales, will generate buzz about the new product, hopefully resulting in even more people buying the new phone.

On the other end of the spectrum, about this time last year my wife was due for a phone upgrade and purchased an iPhone 4 for $1. She absolutely loves it. However, prior to deciding on it she had agonized over whether to get the iPhone 5 which was brand new at the time. One evening we saw a skit on a late night talk show where the host handed people on the street an older model iPhone and told them it was the iPhone 5. In some cases it was the EXACT same phone the passerby owned. Just being told it was an iPhone 5 threw them into a frenzy of complements of how awesome the new phone was compared to what they currently had.

The next day my wife picked up her iPhone 4.

In many ways, cell phones have become like cars, and Apple is the new age car salesman:

Apple is offering the convenience of a single one stop shop to dump your old phone and pick up a new phone. They’re hoping that by doing so you will succumb to your desire to have the latest in the most visible status symbol of the modern day and stop by the nearest Apple store.

Sorry Apple, I’ll be doing the same thing I’m doing with my current car. I’ll be driving my $1 iPhone4 until it dies.

What do you think about Apple’s new trade-in program? Will you be trading in your iPhone and buying the latest?