Ways My Wife Saves Us Money

Ways My Wife Saves Us Money : Ask Your Pharmacist For Cheaper Medication Edition 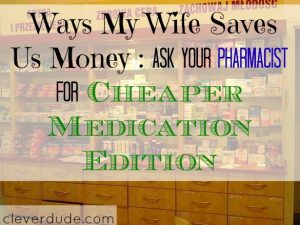 â€œCan we get more of this?â€ my son asked as he handed me an empty container of prescription acne medication. When we first got it last year, his acne was in full blown mid-teenager form. The cream helped a lot, but once it ran out, it wasn’t long before he started breaking out again.

I told him we’d have to see how much it would cost. The full price of the medication was over $400, but with the insurance we had at the time, we only paid $24. However, we changed our medical insurance for 2015, and we would now pay a much higher cost . We have a discount medication card, but it provides much less coverage than our previous plan until our deductible was met.

My wife called the pharmacy, and found out the cream would now cost us $328.

Always seeking out ways to save us money, she started asking questions. Specifically she asked the pharmacy if there was any other medication that could be prescribed that may give us similar results. To our surprise, the pharmacist said we could get the exact medication for a fraction of the cost by simply separating the ingredients.

The acne cream that my son was using was made up of two different medications that are actually shipped separately, and then mixed in the pharmacy into a single container. One ingredient could be purchased over the counter, and the other would require a new prescription.

For $80, we would get the exact same medication that would have cost $328 had we simply refilled his current prescription. The only down side is that my son will have to apply two creams to his face each day instead of one. That’s definitely worth the savings of $248.

I’ve heard of asking the doctor to prescribe generic or a cheaper medication to save money, but I never thought of asking the pharmacist. But it makes sense, since they know how much they will charge at the cash register, the doctor doesn’t.

The pharmacy has a call in to our doctor to change my son’s prescription. By Tuesday we should have the new medication, and my son will be on his way to clearing up his acne. 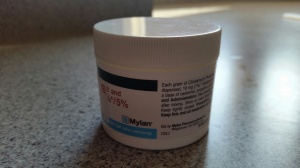 We’ll have saved $248 simply by asking the pharmacist a question.

Have you ever asked a pharmacist about alternate medications? How much did it save you?