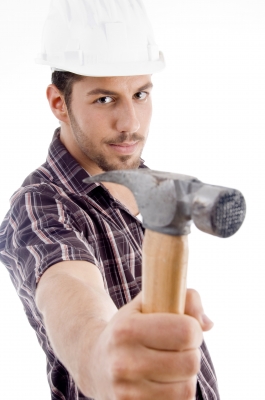 Image courtesy of imagerymajestic at FreeDigitalPhotos.net

I planned on staining my deck early in the spring so I could enjoy a great looking deck during the summer. The weather didn’t cooperate in May, as it seemed to rain every other day. June had countless activities, and I don’t even know what happened to July. So here we are at the beginning of August and the deck still isn’t done.  Good news, though, I did manage to begin the process over the weekend.

The first step was to power wash the deck.  It had multiple coats of old stain that needed to be stripped off.  I had planned on borrowing an in-law’s washer, however they live out of town and I was unable to get it on short notice.  That left me with two options;  buy my own, or rent one. I had no idea how much either of those options would cost, so I did some investigating.

I instantly ruled out buying my own, as stripping my deck is literally the only reason I’ve ever encountered a need to have one. I would probably need the power washer for two days to strip my deck, at a cost of $138. If I was going to pay that much for two days rental, I might as well just buy one. I mentioned this in passing to a friend, who proceeded to tell me that he had a pressure washer that I could borrow.

When I picked up the pressure washer, I made sure to thank him for allowing me to use it. He told me he was happy to borrow it to me, because it’s one of those things that just sits in the garage most of the time. It was nice to see someone get some use out of it.

Life is full of things like this that cost a significant amount of money to purchase or rent, that would be useful to have once in a great while. Besides a pressure washer, some items that come to mind are a chainsaw, a hedge trimmer, and a power saw. It’s nice to know people that have these things and are willing to borrow them to you when you need them. It would also be nice to be able to be complementary and have something that you could borrow in return occasionally.

We live in a close knit neighborhood that socializes with each other frequently. We freely help each other and borrow items as needed. I kind of feel bad that I don’t have much to throw into the neighborhood pool of power tools, but I am willing to help with any manual labor, computer repair needs, or use my BBQ skills to create great food for neighborhood gatherings.

Speaking of BBQ, once the deck is done I’m going to invite my friend and his wife over for some smoked baby back ribs as a thank you for borrowing me his power washer. I’m hoping we can call it even.

Have you recently saved money by borrowing a tool from a friend or neighbor? How much did it save you?