The Three Rules To Borrowing Money To Friends and Family 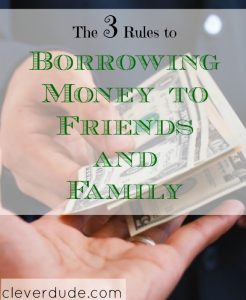 The phone rang on the morning of Christmas Eve. It was an in-law that lived several states away, and was in a tough spot financially. He was asking to borrow some money, and promised that he could pay us back within a week or so. My wife and I were in a position where we could help him out, so we agreed to transfer the funds to his bank account.

I’ve watched enough daytime courtroom shows to know that lending money to family members can be tricky. Disagreements arise regarding whether it was a loan or a gift, and even the amount of money involved. I can’t see how taking a family member to court would ever leave the relationship in a good place. To avoid such a situation there are a few rules that should be kept in mind before you borrow any substantial amount of money to a friend or family member:

A friend or family member asking to borrow money is an act of desperation. We would all like to help out a loved one in need, but you have to ensure that you don’t jeopardize your own financial well being, or a cherished relationship in the process.

Have you ever loaned money to a friend or family member? How did it turn out?