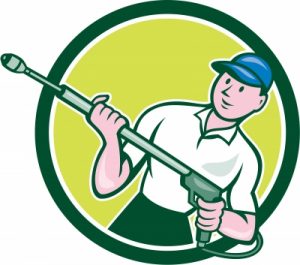 I am eternally grateful that a friend of mine was willing to lend me his power washer for my deck staining project. Power washing my deck is proving to take a lot more effort than I originally though, as I’ve now spent a 2-3 hours a day for 5 days power washing. I’m not done yet, either.

But, I really dislike borrowing things from people. I’m always afraid that it will break while I’m using it, which would put our relationship in an awkward position. Last Saturday, on day 2 of the great deck power wash project, my greatest fear came true.

I assembled the unit as per the instructions and started up the pressure washer. But when I pulled the trigger on the wand, the nozzle shot of the end and landed in the street. Figuring I just didn’t get it on tight I put it back in and pulled the trigger again. This time, however, water squirted out not only from the end of the nozzle, but also the sides. The connection between the nozzle and the quick release mechanism wasn’t tight, and water was leaking everywhere.

A few more tries, and some colorful language later, I was on the internet searching for solutions. I didn’t think I would have to replace the entire power washer, but I did find that I could buy a new wand at a local hardware store for $30. I hopped in the van and headed for the store, bringing the entire wand with me as a backup.

I turns out my decision to bring the wand with me saved me some money, as well as the need to tell my friend that I had broken part of his power washer. Inspecting a new wand in the store, I noticed there was a small rubber O-ring gasket inside the quick release mechanism that was missing from my friend’s wand. My guess is that it flew out of the wand with the nozzle and went rolling into the street. I found an employee, explained the situation, and asked if they sold O-ring gaskets. She knew exactly what I was talking about, showed me an an O-ring gasket kit that held about a dozen gaskets of varying size priced at just over $4. When I got home, I installed the smallest gasket. It worked perfectly.

This isn’t the first time a person at a hardware store has helped me save some money. There’s a gentleman that works at the same store who is my â€œgo to guyâ€ when I need some advice on how to fix something. I tell him what is broken, and then I follow him around the store while he picks up small items and describes to me how I can use them as a solution to my problem.

My first instinct was that I would have to replace the entire pressure washer wand. But with a little investigation, and some help from my friends at the hardware store I was back power washing within an hour, with my wallet only $4 lighter.

Have you ever asked the advice of someone that works in a hardware store, or any other store to help solve a problem? Were they able to help?