The Frustrating Tale Of a Teenager And His Cell Phone 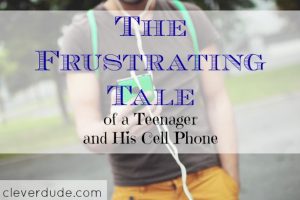 My wife and I had both texted and called our son, but we had been unable to get any kind of response from him for well over an hour. He was at a friend’s house for the afternoon while my wife and I traveled to a nearby town for a relative’s 80th birthday celebration. He had responded to text messages earlier indicating he was still at their house, and having a good time. But heading back into town, we were trying to find out whether he was ready to be picked up. I know he constantly has his phone nearby and checks it often, so his lack of response was frustrating. My wife tried a new tactic and sent him another text saying, â€œComing to get you.â€

As if by magic, he responded immediately. He wasn’t ready to come home just yet.

My wife told him to call immediately. Once she got him on the phone he explained how he had left his phone in â€œDo Not Disturbâ€ mode, so that it would not make any noise during the school day. Asked why he didn’t put it back into normal mode since it was the weekend, we got the usual response you’d expect from a teenager, â€œI forgot.â€

This isn’t the first time we’ve had this issue with him. He gets home from school a few hours before my wife and I get home from work, and it’s always difficult to get a hold of him because his phone is constantly in this mode.  I know he has his phone sitting right next to him as he plays video games on his computer after school, but in this mode it won’t make any noises, nor will it light up when he gets a text or a phone call. Plus, he won’t hear the home phone ringing because he has his headset on while playing games.

When I picked him up from his friends house, I decided it was time to have a discussion with him about his phone. I told him that I know he uses his smart phone to keep in contact with his friends, to play games, and to play music, and that’s great. But, the primary reason he has a cell phone was so that we can get a hold of him when we need to talk to him, and vice-versa. I recounted how that hasn’t been working out very well as of recently, and then emphasized that while he purchased the phone with his own money, his parents pay for the monthly plan.

If we continued to have this problem, he wouldn’t have a phone anymore.

Although I was firm and matter-of-fact during the conversation, I delivered the message in an upbeat sort of way that didn’t make him feel like I was disciplining him. It was more of a, â€œYou need to do better, or there will be changesâ€ sort of tone.

He went on to tell me which of his friends had been there, what they did that afternoon, and how much fun he had. I was happy to hear this, as he spends more time than I’d like in front of his computer, and in my opinion, not enough time hanging out with his friends in person.

I hope the message got through. His cell phone can be very handy tool when I’m trying to find him in a crowded mall, picking him up from school, or when he’s at a friend’s house.

All he has to do is answer it.

Do you think my son’s not answer his cell phone was on purpose? Have you ever had an issue with your son or daughter not answering their phone?