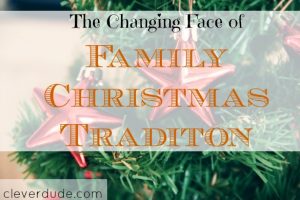 I feel old saying this, but things were very different when I was a kid. My family and I lived in a small rural town in the Midwest, and drove 13 miles on Christmas Eve so my brother and I could participate in the childrenâ€™s service. Santa came while we were away, so upon returning home we would burst into the house and run for the living room to see the harvest of presents that had been left under the tree. We would stay up late playing with our new toys, and then get up a few hours later for Christmas Day service. Weâ€™d have Christmas with my momâ€™s side of the family during the afternoon, and my dadâ€™s family in the evening. Everybody was within 15 miles of each other. It was convenient and easy.

Things arenâ€™t so convenient or easy now. My brotherâ€™s family and mine live on opposite ends of the state with my parents in the middle. While the 2.5 hour drive we each have to get to our parentsâ€™ house isnâ€™t that far in the whole grand scheme of things, it does prohibit family gatherings for different sides of the family from occurring on the same day like it did when we were young. So, we try to accommodate the plans of everyone and rotate who gets to host on the actual Christmas Day each year without any hurt feelings. Sometimes we choose to just stay home, and all family gatherings are moved to the weekends preceding and following Christmas.

Many years we travel on Christmas Eve, so weâ€™re at our destination on Christmas Day. In those instances, we move our immediate family Christmas. When my son was younger we simply explained it by saying Santa has to visit so many houses, that some years he has to come a day early. Now being 15, heâ€™s certainly on to who the real Santa Claus is, but thereâ€™s the interesting thing; I could actually sense his disappointment when we told him weâ€™ll be doing things a bit non-traditionally this year.

He likes the whole ordeal of waking up Christmas morning, and meandering down to the tree. We know itâ€™s sincere because any other morning he wouldnâ€™t emerge from his room until well after noon. He likes the idea of family togetherness, and traditional Christmas memories.

But doing things differently is just part of the territory these days when families are more spread out than ever before. I can certainly see his point, but I with the realization that in just a few years my son will be out on his own, it wonâ€™t be long before Iâ€™ll be begging him to travel across the state to come home for Christmas as well. 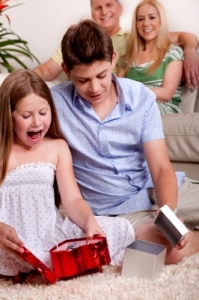 Image courtesy of photostock at FreeDigitalPhotos.net

How do you handle traveling for Christmas and multiple family gatherings far apart from each other? Have you ever had to have Santa come early at your house?