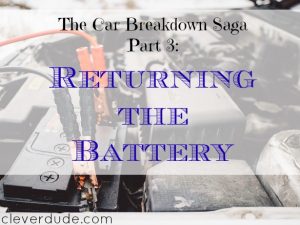 Unfortunately, I had two issues:

We had a perfect opportunity to return the battery as we were heading out of town to visit family and would be driving right by an open Sears automotive center. My wife called and verified that they would honor the warranty at that location, and asked if there was any way that they would be able to refund our money given we had already replaced the battery.

To our surprise, the man agreed.

A few hours later we walked into the store with the battery.  The employee who helped us, who also happened to be the manager, hooked up the battery up to a tester to make sure that it was unusable.  A few minutes went by as the machine displayed numbers that meant nothing to me, but caused the man to nod his head frequently seemingly in agreement that our battery had reached the end of it’s life.

At his invitation we followed him to a computer terminal where he said he would begin the next step of the process. I whispered in my wife’s ear, â€œDo you think we ought to mention to him that we want cash and not a new battery?â€ She re-iterated my thought to the manager, who stopped, turned around and said:

â€œIt doesn’t work like that. All I can do is give you a new battery.â€

We explained that since the automotive department of the Sears store in our city had closed and we had had no choice but to replace our battery locally to get our car drivable again. We went on to tell him that we had talked to Greg, who had since overheard us and joined our conversation, and he had indicated we could receive a refund instead.

Before we drove away from the store, I inspected the paperwork I had received from the return and compared it to the paperwork I had from when we originally purchased the battery. We bought the battery for $99 almost 3 years ago, but they refunded us the current price of the battery: $109 plus tax. Just to make sure everything had completed as promised, I logged into my online banking portal using my cell phone and saw a refund of $117 and change had already been deposited into my account.

It was refreshing to see that Sears not only honored their warranty, but understood our situation and refunded us our money instead of forcing a new battery on us that we would not have been able to use.

Have you ever had to go through extraordinary lengths to use a warranty? How did it work out for you?