Teens And Money: When There’s Too Much Month at the End of Their Money 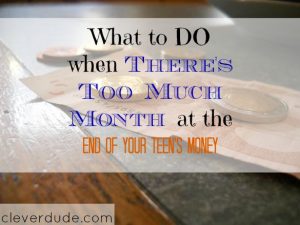 â€œI want to stop having money automatically taken out of my checking account,â€ said my son.

I looked at him, puzzled, wondering why he would say such a thing.   He was referring to the automatic transfer from his checking to savings we setup to occur the day after each payday. He went on to explain that payday was four days away, and he didnâ€™t have any money left. He worked a couple days before payday and he wouldnâ€™t have any funds to buy snacks while he was on break. He said he would continue saving, but he wanted the freedom to spend more if he had a need to.

â€œThe fact that youâ€™re out of money is a money management problem, not a lack of funds problem,â€ I replied.

I look at his checking account frequently just to keep an eye on his spending. His discretionary spending basically falls into three categories:

I reiterated to him that saving money is a requirement; he cannot stop the automatic transfers to his savings account for the following reasons:

Heâ€™s just going to have to learn to manage his money better. I gave him some suggestions. Each time he gets paid, he should do the following:

When payday arrives, he has his schedule for the next two weeks. Budget an amount for lunch per day, and then multiply it by the number of days he works. Set aside that amount in cash so he knows he will be able to buy food each day at work.

Look at the last few two week periods, and add up how much he spends per pay period for online gaming. Use that as a guide for how much to allocate for online spending each week.

After the previous two categories are subtracted from his available funds, see how much is left over for going out with his friends.

If he doesnâ€™t like how the numbers played out, adjust the amounts so he has ample funds in each category.

While itâ€™s never fun to run out of funds, this was a great opportunity to teach my teenager a lesson in money management. The situation he found himself in is one that could also happen to him as an adult. When it happens, just has he had to in this case, you have to live with the consequences of not having any funds for a few days. Hopefully he learned how to better manage his money and can apply the same technique to his budget as an adult as well. 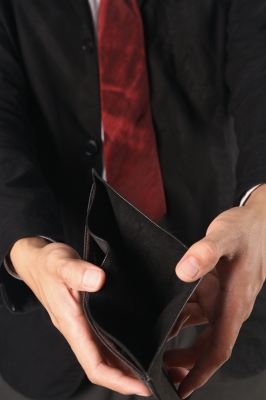 Image courtesy of scottchan at FreeDigitalPhotos.net

Have you had a teen that was in need of a money management lesson? Have you ever found yourself with too much month at the end of your money? How did you solve that problem?