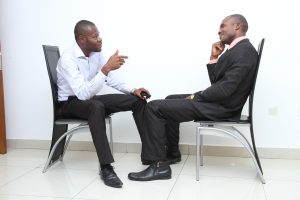 My son got his first part-time job at a grocery store through a friend of ours. It was literally as easy as him turning in an application and going in for an informal interview where they essentially told him he was hired as soon as he walked in. So I knew there would need to be some instruction and guidance when he started looking into getting a different job at an electronics retailer.

I fully supported his desire to switch jobs, as the electronics retail job is more closely aligned with his favored career path. It took him awhile to get his application in, complete with references, but he immediately got called for an interview. Knowing this interview would be more than just a formality, I gave him some pointers to give him the best chance of being hired.

My son typically walks the earth in athletic shorts and t-shirts. Even when it’s winter. Seriously. This situation called for dress pants, one of his collared polo shirts, and dress shoes. I also recommended he tuck in his shirt and wear a belt. Yes, son, a belt. Even if you don’t really need one. Because it looks nice. The way you present yourself will be a reflection of how you represent the company you work for, especially if you’re on the sales floor.

Don’t just be on time for the interview, be early. This gives you extra time if there is traffic, or if you have trouble finding where you’re supposed to go. If you do get to where you need to be early, it gives you time to calm and compose yourself.

I told him to keep in mind that an interview goes in both directions. He needs to ask questions to find out if he really wants to take the job if one is offered. Some questions he should as if the information is not offered:

At the end of the interview, extend your hand for a handshake. Thank the interviewer for the opportunity to talk. Ask for contact information for the interviewer, as well as when he might expect to hear back.

When we started our discussion, my son had a look on his face saying, â€œI got this.â€ But as we talked more, his tone softened as I think he realized he was getting some good advice. While this was my son’s first real interview, it won’t be his last, and these interview skills will hopefully help him land a great paying job when he strikes out on his own.

How about you Clever Friends, did you parents give you interview advice? Do you have anything to add to the list?