Teens And Money: Teaching Teens That Coupons Are Cool 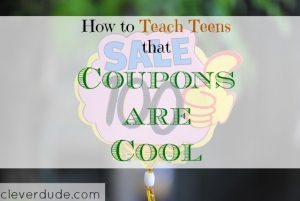 My sleepy eyed, bed headed teenage boy emerged from his room at 11:30am Saturday morning informing us that his friends were coming over at about noon to hang out. He declined my offer to make him lunch before his friends showed up, explaining that they were going to order pizza.

The next day, I noticed that he had a pending transaction to his checking account from Domino’s Pizza for $28. Remembering that there had been been two empty pizza boxes sitting on the kitchen counter I knew that he could have saved some money if only he had known about the coupon drawer.

He had ordered two pizzas and a side order of parmesan bites. I told him to follow me into the kitchen. I opened a drawer next to the refrigerator and pulled out a coupon sheet that we had recieved in the mail. One of the coupons offered 2 medium pizzas and an order of parmesan bites for $16.99. After tax and the delivery charge was added, their total would have likely been close to $20.

The coupon would have saved him $8.

I told him  there was another way he could have saved money if he didn’t want to dig through the coupon drawer in front of his friends. I brought up the Domino’s site online, and clicked on the Coupons tab. Listed right there on the website (which is how they ordered the pizza) was the exact same coupon. All he had to do was click the “add coupon” button and he would have saved $8.

I summarized what he should do each time he orders pizza, or even goes out to eat with his friends:

Many teenagers don’t use coupons because either they think it’s uncool, or they’ve simply never been taught to use them.  I want to make sure my teenager knows where to look for them,  how to use them, and illustrate how much he can save. Maybe by doing so, he won’t think they seem uncool and use them whenever possible.

Do you have a teenage child? Have you taught them to use coupons? Did you use coupons as a teenager?