Teens and Money: Should I Make My Teenager Save Money? 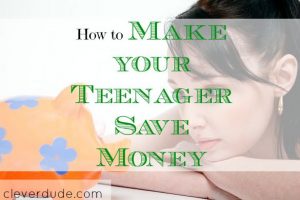 About a month ago, my son informed me that he wanted to cancel his automatic savings transfer the Monday after each paycheck. At the time, he had run out of spending money and felt like he should be able to keep a larger portion of his paychecks for day to day use. I thought we had come to an agreement that he just needed to manage his money better, and that the automatic transfer would remain as it was. Then I noticed that with his last paycheck, the amount transferred was $50 less than the original agreed upon amount.

I was hesitant to initiate a discussion regarding the decreased transfer amount. After all, he’s the one that sacrifices sleeping in on the weekend, as well as some weekday nights to earn money, and he did still save a significant portion of his paycheck. But at the same time as a parent I want to take advantage of every opportunity to teach him about how to manage his finances.  He’s already learned several important lessons, and one that I want to emphasize is the importance of prioritizing saving over spending.   Additionally, it felt like he had ignored our last discussion on the topic.

I knocked on his bedroom door and proceeded with caution.

I don’t know if he was unaware that I check on the state of his accounts every couple of days or not, but he seemed surprised that I knew about the change in the transfer amount. I made a couple of points:

Teenagers feel like they deserve freedom and respect.  My approach is that my son gets that freedom until he gives me a reason to take it away.  In the six months he’s had a part-time job, he’s saved a significant amount of money.  I want that to continue, while allowing him to have some say in how much he saves out of each paycheck, and how much he gets to spend.  So far so good, let’s hope that continues.

Would you FORCE your teenager to save a certain amount?  How much freedom would you give them to determine how much they save, and how much they can spend?