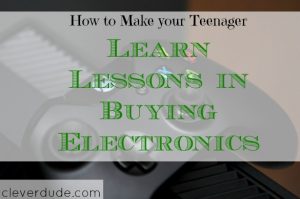 My son was visibly excited to open up the box left by the UPS driver. His new graphics card for his computer had arrived, and he was anxious to install it. He brought his computer to the kitchen table where we laid it on it’s side, removed the side cover and prepared for surgery. Once the old card had been removed, the new card installed and everything put back together he carried it back upstairs to his room to try it out. Unfortunately, there was one little catch.

He didn’t have the right cables to hook up both of his monitors.

His old graphics card had two of a specific kind of connectors (DVI) that he used to connect both his monitors, however his new card only had one. Instead, this card had an HDMI connector and several DisplayPort connectors. Instead of going to a nearby electronics store to buy the cable he needed to fully utilize all his components, his secondary monitor sat on his desk unused.

Last week he had a gaming party with his friends. He sets up tables in our basement, his friends all bring their computers over, and they play games together online late into the night. During his get together, he came upstairs and asked if I had an HDMI cable he could borrow. I disconnected an HDMI cable that connected a blue-ray player to our TV.

A few days later I realized that I never got the HDMI cable back from my son. I knocked on his door and asked him where it was at. He pointed at his second monitor, which was lit up and in use.

â€œYou’ll need to buy your own cable, because I need that one for the blue-ray player,â€ I said.

â€œOr I could buy you a new one and I could just keep this one,â€ he replied.

â€œThat works, just make sure you get me a cable soon.â€ I stated.

As the short conversation concluded and I turned to leave, my son had a funny look on his face. I think he expected that I would just go buy a new cable, and allow him to keep the one he was using. I wanted him to learn a couple of lessons from this experience:

It’s been over a week since his gaming party, and he still hasn’t replaced my cable. I might mention it to him, but I’m not going to push him to do it. If a time comes when I want to use the blue-ray player, I’ll simply knock on his door, and retrieve my cable leaving his monitor dark. Maybe then he’ll feel like going to buy a new cable.