Teaching A Teen About Tipping 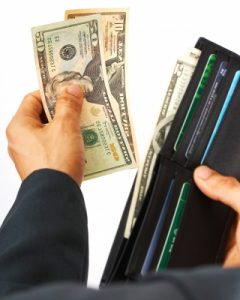 When my son got his driverâ€™s license, in many ways daily life became much more convenient for both of us. He could drive himself to work, friendsâ€™ homes, and to run errands. It also opened up the opportunity to teach him countless financial lessons, including how to tip.

Last night I gave him some cash, and sent him off to his haircut appointment. Before he left, I told him that he should tip the hair stylist about 20%. I could tell by the look on his face that it wasnâ€™t quite registering. I gave him some examples: If the hair cut cost $10, the tip should be $2, a $20 haircut would get a $4, and a $25 haircut gets a $5 tip. If nothing else, I told him to pull out his phone and do the calculation.

When he returned, he gave me the change. Curious as to how his transaction went, I asked him how much his haircut cost.

â€œHow much did you tip?â€ I asked, confused.

â€œI donâ€™t know. I just gave them all the money and this is what they gave me back.â€

He had apparently expected the salon front desk employee to decide how much of a tip he wanted to leave. We got in the car, drove to the salon, and gave the stylist her tip for a job well done (she did an amazing job).

When we got home, we had a more detailed discussion about tipping:

For a teenager that is used to just handing over payment for goods and getting back change without much interaction, being in a situation where tipping is involved will be uncomfortable at first. But knowing when to tip, how much to tip, and how to complete the transaction is a skill that everyone needs to learn.   Iâ€™ll be watching for the next opportunity to put him in this situation, and see how much of our conversation stuck.

Have you had to teach a teenager about tipping? How did you do it?