Sometimes You Have to Learn The Hard Way 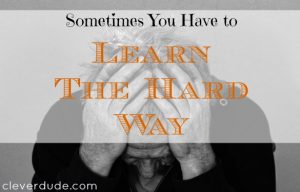 Have you ever seen a bad purchase, and found yourself powerless to stop it?   I witnessed one recently that had me shaking my head, and while I fully admit that I have been known to be wrong from time to time, in this specific instance my instincts were dead on.

If you know anything about cats, you know they are independent and sometimes peculiar creatures. Our two cats seem to have a thing about where they drink water. Theyâ€™ve always had a water dish right next their food, but they seem to not want to drink out of it. Weâ€™ve tried several different types of pet watering devices, but they seem to prefer to make us fill up a bathroom sink, or turn on the bath tub to a slow stream for a minute so they can get a drink of water.   Within the last six months, however, somehow weâ€™ve gotten them to drink from a small glass bowl that we place on the floor next to our fridge.   For whatever reason, they absolutely love it. We fill the bowl at least once a day, and they even meow at us when itâ€™s empty. 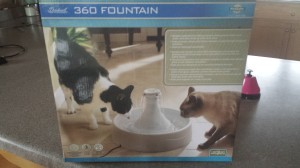 Prompted by a purchase of some friends of ours my wife recently decided, despite the success of the glass bowl, that we should get a cat water fountain. I categorized the thought as, â€œfixing something that isnâ€™t broken,â€ but she antagonized and persisted in her attempts to add it to our spending plan. While walking through a home improvement store, we happened to run across a cat fountain on an end cap. She gave me one of those looks and declared that it must be a sign, we must buy it. She was sure our cats would love it. I couldnâ€™t resist her any longer and caved in. Even as she put the box in our cart, I was sure that the $60 cat fountain was going to be a failure.

When we got home, she excitedly assembled the fountain, filled it with water, and turned it on. I could hear the buzz of the motor engaging, and then the soft splash of the water dropping out of the spigot into the pool below. The cats rushed to investigate the new noise. They looked at it, batted at the water a few times with their paw, and then walked away.

Over the course of the next three days and countless attempts to encourage the cats to use it, not a single drink was had from the fountain. We had removed the glass bowl from the kitchen, and it was painfully obvious from their meows that they were thirsty and wondering where it had gone. I retrieved the bowl from the cupboard, filled it with water, and said to my wife, â€œWatch this.â€

I placed the bowl right next to the cat fountain. Both cats ran to the dish and drank eagerly from the bowl. â€œFine,â€ gruffed my wife. She unplugged the cat fountain, emptied the water and put it back in the box.

My wife told the service counter employee at the home improvement story what had happened, punctuating the story with, â€œThey hated it.â€ The employee chuckled and agreed to allow us to return it. Walking away from the service counter I could see out of the corner of my eye that my wife was looking at me. I bit my cheeks as hard as I could, but I couldnâ€™t stop the, â€œI told you soâ€ smile from pushing through.

She softly hit my shoulder and said in a deep voice through her clenched teeth, â€œNot a word.â€

Have you tried to stop a purchase you just knew wouldnâ€™t work out?