Save Money By Taking Out Your Own Trash 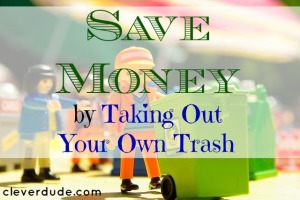 I hate my garbage company. I’m sure they’re no different than any of the other refuse disposal companies in my area, but I still hate them. They advertise a low monthly rate, but then tack on extra for the required recycling service, more taxes and fees than than you could play spin the bottle with, oh and then there’s that fuel surcharge.

As gas prices started to climb over the last decade, they notified customers of the addition of a fuel surcharge. When gas prices go up, the surcharge increases. If gas prices go down, so does the surcharge. Sounds good in theory, except the surcharge is calculated using the national average, which is almost always higher than where I live. Also, the price of gasoline would have to drop to 87 cents a gallon for there to be no surcharge. I would bet money we’ll never see gas at 87 cents a gallon again. I just accepted my waste disposal bill for what it was, as garbage pickup is a necessary evil. I pay my $140 every three months, even though I don’t like it.

I accepted it until yesterday, when a thought occurred to me that turned the proverbial garbage can upside down.

We had a large party over the weekend, with a lot of extra trash. Seven 55 gallon bags worth actually. Our waste disposal company would likely charge us an arm and a leg for that much extra trash, so I decided to take care of it myself. I laid down a tarp in the back of my van (seats folded down), loaded the bags and took them to the city incinerator where they charged me $5 a bag to dispose of them.

Taking seven 55 gallon bags of trash to the incinerator cost me a total of $35.

My weekly waste disposal service is for a 60 gallon can, roughly one of the 55 gallon bags. In theory, I took 7 weeks of trash to the incinerator. Even if we say that a three month period has 14 weeks, that means that taking the garbage to the incinerator myself would cost me $70 for three months.

Disposing of my own trash would cut my bill in half.

There are a couple of drawbacks, however:

None of these are insurmountable, but are they worth saving $70 over three months? Or am I just anxious to stick it to my waste disposal company?

Would you take your own trash to the dump or incinerator to save money? 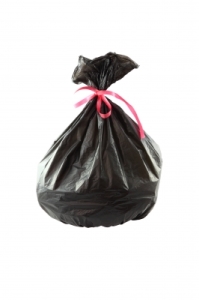 Key things to remember when applying for a loan
Is a membership to National Consumer Panel worth it?
Blue Apron review
Saving on water utilities for pool owners
Which is Cheaper: Keg or Canned Beer?

Image courtesy of Keerati at FreeDigitalPhotos.net