Restaurants That Serve Family Style: 3 Ways To Control Your Bill 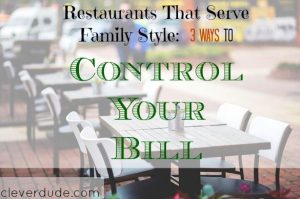 My wife and I had been looking forward to having dinner with friends all week. We were going to a semi-fancy restaurant that I had never been to before. We were seated immediately as we had made reservations, and handed menus. As I looked over the dinner options, I knew I was in uncharted territory.

The specific wording in the menu said, â€œPlates to share.â€ The server described to the table that we would likely want to order one entree for every two people. The entrees would be put on the spinner in the middle of the table, and we would share all the food.

I also couldn’t help but notice the prices of the entrees varied significantly.

Suddenly an article I had read popped into my head in which friends out for a meal decided to just split the bill equally. One person felt completely ripped off because they drank water and ordered an inexpensive dish, while the friends ordered drinks and more expensive entrees. I had never experienced that problem before because I have no problem simply telling the server to break the bill into separate checks.

But this situation was different. The couples could easily order entrees of varying prices, but we would all be sharing the food. I may order something inexpensive, but if my friends ordered the crab legs, I would eat some of those, too.

Questions danced in my head. Would the bill be combined and split equally? Should I be expected to pay for more expensive dishes that I didn’t order?

I contemplated these questions as I pretended to look at the menu. I decided that if I expected to be able to eat some of all the dishes that came to the table, I should expect to help pay for them. On the other hand, I wanted to be somewhat in control of my bill. The time to act was before we ordered.

I spoke up and asked the group how we wanted to handle ordering. We decided that each couple would select one entree. Each couple stated what they wanted to order to ensure we didn’t have any duplicates, and that we were mindful of any allergies for special food needs.

Discuss the Bill Before Ordering

I then asked how we wanted to handle the bill since we were all sharing. It felt awkward asking the question, but I could sense the relief from other members of the group. I wasn’t the only one thinking about the bill. I suggested that each couple be responsible for what they order. If anyone happened to order an entree that was significantly more expensive, I said I would be willing to give them some extra cash directly. I reasoned that it kept the billing simple, and we didn’t have to worry about who had what to drink or if someone wanted to order dessert.

It makes things easier for the server if they’re told how the bill will be handled upfront. We told our server that we would like separate checks for each couple.

The key to handling any situation is communication. By acknowledging and resolving the awkward question regarding the bill before we ordered, the whole group was more relaxed. Nobody had to worry throughout the entire meal how the bill would be handled, or how much money they would have to pay. The conversation flowed freely, and a great time was had by all. 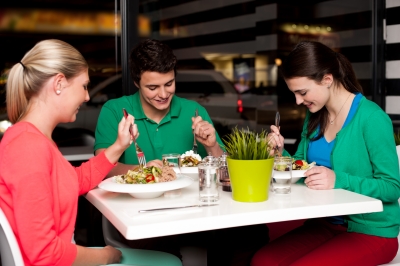 Have you ever eaten with friends at a restaurant that serves the food family style? How did you handle the bill?