Proof That You Can Sell Anything On Craigslist 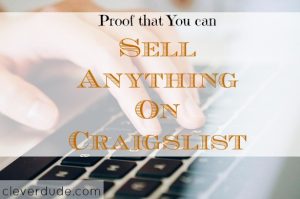 You know the saying, â€œOne man’s trash is another man’s treasure.â€ The phrase never rung more true than the day I helped load a metal monstrosity weighing several hundred pounds into the back of a pickup truck.

I discovered my love for grilling immediately after I graduated from college and got my first apartment. My passion for grilling evolved over the years into smoking meats. A few years ago I decided to build my own smoker. What was supposed to be an inexpensive and fun project turned into a massive smoker made out of two 65 gallon drums By the time I got tired of working on it, I had sunk close to $300 and countless hours of time into it.

It sort of worked, but not very well. It took a long time, and a lot of fuel to get it to a decent cooking temperature. Once I got it there, it required constant attention and adding of fuel to maintain the temperature. It had leaks everywhere, and it would take significant effort to tighten it up and make it more efficient.

My gigantic homemade smoker sat on my back patio for a couple of years. The paint eventually starting chipping off from being left out in the elements. Every so often my wife would ask me what I planned to do with it. I really didn’t know what to say. I knew I really only had two choices:

It made me kind of sad to think about destroying it and paying to remove the traces of a several hundred dollar mistake. So I took a chance and listed it on Craigslist. I didn’t expect any interest. But by the end of the day, I had two emails inquiring about it.

The next afternoon I was helping a gentleman load my metal monstrosity into the back of his truck. He was getting married the next weekend and was holding the reception at his acreage outside of town. He didn’t care how inefficient it was, he had plenty of wood. He just needed something with a lot of surface area to cook for a lot of people.

He handed me the agreed upon price of $50, and the smile on his face that showed he was as happy about finding the smoker, as I was about getting rid of it.

He found his treasure, and I got rid of my trash.

Have you ever sold anything you never thought anyone else would want?