Parenting Challenge: Should I Give My Teen Cash For School Lunch?

When my son started his junior year of high school in September, I put him on a lunch budget. The plan was to $35  into his lunch account every two weeks allowing him to purchase the base lunch provided by the school, as well as the occasional extra ala carte item. If he ran out of money, he would have to use his own funds for lunch. This action was a direct result of extremely high spending on some days during the previous school year. Unfortunately, the lunch budget hasn’t quite worked out as planned. 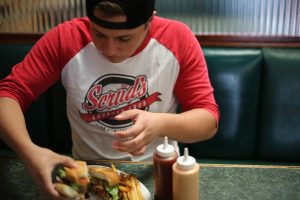 My son hardly ever eats lunch at school.

At his age, there’s always someone in his group of friends that drives to school. With an open campus, it’s common for students to leave the school grounds and get lunch at one of the nearby fast food restaurants. As the first few months of the school year have gone by, I noticed that charges from the school cafeteria have become less and less frequent. My son confirmed my suspicion when he told me that he didn’t eat at school very often, and that he’d rather he just put the lunch money into his checking account instead of his school lunch account.

I had mixed feelings about just giving my son cash for lunch during the school week.

Eating fast food for lunch each day isn’t very nutritious. My initial reaction is that we supply him with the ability to have school lunch. If he chooses to eat somewhere else, then that will have to come out of his pocket. The theory is that this would encourage him to eat at school where the lunch is supposed to be balanced with healthy choices. The reality is, I can’t make him choose healthy choices even if he eats at school. He may just choose just as unhealthy choices at school off the ala carte menu, or just choose to go out to eat anyway.

It’s my responsibility to ensure that he gets food. Should it really matter whether it’s in the school cafeteria, or a lunch from home, or any other source?

He’ll still be given $35 every two weeks. This will not cover the full cost of his lunch if he goes out to eat every day. But, that’s his choice. He could eat at school for less money, or he has to chip in some of his own money if he wants to get in a car with his friends and go out for lunch.

I decided to agree to his request, and just give him cash every two weeks for lunch. This is the time of his life where I need to allow him to make some decisions on his own. I’ll ensure there’s enough money in his lunch account for a day or two just in case he decides to eat at school, and also keep pushing healthy foods at home for the other meals of the day. This will allow him to have the freedom to decide what he does for lunch, while still helping him learn the value of budgeting by seeing how much more it costs to eat out than at school.

Would you give your teenager fund to spend as they choose for school lunch? What would you have done in my situation, Clever Friends?