Not Checking Your Receipts? You Could Be Throwing Money Away! 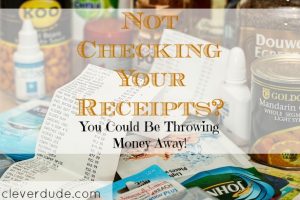 Under normal circumstances it probably would have just slipped through the cracks.

For the last few years I have been a participant for the National Consumer Panel. I enter purchases into a handheld UPC scanner that then transmits the information back to them every Saturday evening at midnight via the internet.*

Each time my wife and I return home from grocery shopping we break into a routine. All the groceries are put on the counter, then my wife sits on a bar stool reading the information from the receipt, while I scan the UPC symbol and enter the prices into the scanner. We were doing just this on Saturday morning when she noticed that we had been charged twice for a package of boneless chicken breasts.

Within seconds of noticing, she was dialing the grocery store and asking to talk to a manager. I was skeptical as to whether the manager would believe her, as it would be easy to buy two of the same thing, and then claim to have been overcharged. But my wife’s calm but forceful demeanor resulted in the manager agreeing to refund us the overage. She smartly asked for the manager’s name just in case we encountered any problems. Receipt in hand, we returned a few hours later as we drove by the store on our way to the gym and successfully received our $6.26.

This isn’t the first time this had happened.

It made me wonder how often we’re overcharged on purchases and don’t notice simply because we don’t double check our receipt (we don’t scan every time we go shopping). For purchases of just a few items it’s relatively easy to realize something isn’t right, but for large weekly grocery shopping trips that include dozens of items, a double charge of an item can easily go undetected. While the money returned to us wasn’t large, it’s still MY money and I don’t want to just give it away!

It still boggles my mind how the cashier can scan something twice.

Think about how many bills and receipts you get each month where there is the possibility of an error. Do you check them all for accuracy, or do you just trust that they are correct? Have you ever found an error on a grocery bill or any other bill that you had to have corrected? How did it work out for you?

*Note: As per an earlier post, I had originally intended to cease being a panelist. However, they offered me an incentive that changed my mind and I decided to continue.