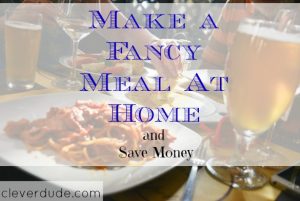 As of 10 am on December 31st, my wife and I didn’t have any plans for New Year’s Eve. We both expressed a feeling of indifference to this fact, at least outwardly content to make a nice dinner at home and ring in the new year by ourselves.

We discovered that some close friends were suddenly free for the evening. After several additional text messages, we had a total of three couples coming to our home for dinner, games, and fun. First up, we visited the party supply store for the customary decorations and noisemakers.

There had been some talk of going out for the meal, but given the difficulty of getting reservations anywhere nice on such short notice, as well as the expense, the group decided to have everyone pitch in and have a great meal at our home. My wife had been craving crab legs, as there aren’t many restaurants that serve them right now due to the current open market cost being extremely high. We decided to do surf and turf, adding fillet Mignon to the menu as well as some other side items.

We served 9 total people (4 couples plus our son), thus the cost of the meal was $16.61 per person. Anytime I’ve seen a surf and turf option on the menu with king crab and fillet Mignon, it’s usually priced anywhere between $30 and $50.

We started the new year making great memories with friends, having a great meal, and saving money. I can’t think of a better way to start off 2018.