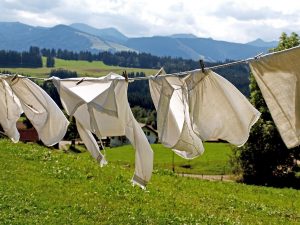 My son held up a tan pair of pants, pointed at three distinctly visible grease stains on the right leg, and asked if I could get them out. I could feel my face contort into a shape that expressed my extreme doubt. I’ve dropped ribs on a shirt at a BBQ restaurant, spilled butter on my favorite tank top, and countless other events which unless I instantly threw my shirt into a sink full of scalding hot water and scrubbed my fingers raw with any type of soap I could find, the shirt was ruined. My first few attempts at getting the stain out of my son’s pants were met with the same failure, but I was able to find a secret weapon that saved not only the pants, but undoubtedly will help with many more articles of clothing in the future.

I was determined to defeat the grease stain. The pants weren’t that expensive, only costing $30. But the number of times they’d been worn were still in the single digits, which didn’t represent the kind of value I expect to get out of a pair of pants. I sprayed them with stain fighter and washed them. Failure. I did it again, and then rubbed in laundry detergent. The grease stain refused to relinquish it’s grip. It was time to bring in the big gun. The internet delivered.

I successfully got the grease stain out of my son’s pants with a 97 cent mini-bottle of Dawn dish washing detergent.

I followed the directions I read on the internet:

The dish washing detergent was successful where laundry soap, as well as laundry stain fighter failed. It turns out most laundry soap doesn’t have the right ingredients to remove grease stains. However, dish detergent does since dirty dishes commonly involves grease.

I wish I would have known this trick years ago, as both my wife and I have thrown away clothes that we thought were ruined by grease stains, which of course required us to spend the cash to replace them. Next time I have a grease stain instead of going clothes shopping, I’m going to the grocery store.

Have you ever thrown out a piece of clothing because you thought it was ruined with a grease stain? Do you have any other tricks to remove tough grease stains from clothes?