Is Your Garbage Bill Negotiable? 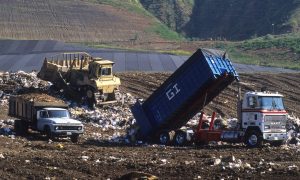 You have to periodically reevaluate all your monthly bills. You just have to. Whether it’s shopping around for a new insurance company, investigating what new mobile phone plans are available, or renegotiating a discounted package with your cable company, it’s worth the time to make some phone calls from time to time and ensure you’re getting the lowest price possible. This week I discovered there’s another monthly bill that needs some occasional attention.

I recently found that our waste disposal company’s rates are not set in stone.

I put our garbage by the curb as I do every Friday morning. When I got home from work I saw that the bin was still full. When I checked my email, I found a familiar form email stating that our garbage pickup would be delayed. It’s normal for our pickup to be delayed by a day when a holiday falls during the week, but this time it was delayed until Monday for circumstances beyond their control.

Delaying our pickup by three days was not going to be pretty. As is customary in my home, the night before garbage pickup is refrigerator clean out time. Having perishable items cooking in a garbage bin during a heatwave for three days would undoubtedly result in some ripe smells being emitted from the bin. Additionally, since our bin was full, finding a place for three additional days of garbage was a bit of an issue as well.

That night we had a cul-de-sac meeting. Basically that just means that everyone in our cul-de-sac walks into the road and talks for an hour. But this time, there was a purpose. One of our neighbors had gathered service plan information from other waste disposal companies. All of which were cheaper than the service we all currently had. We planned a neighborhood mutiny against a certain waste disposal company.

We all planned to call the next day to discontinue our service, and switch to a different provider.

What happened the next day was unexpected. One of our neighbors started a group text message thread about 10:30am. One after another, the residents of our cul-de-sac relayed their experience with calling the waste disposal company in an effort to drop their service. Here are some of the results:

My wife called and was given an offer $10 a quarter higher than the alternative provider, but was also offered one free month.  Taking everything into consideration,  our yearly cost would be about $9 more than switching to the alternative provider, but would still save us 40%. We decided it wasn’t worth the headache of having them come get our bins (which is rumored to have it’s own fee…..) and then switch over to the new provider. We decided to stay as well.

We were a baffled by the difference in offers. The customer service representative said that they had a tool that they plugged in each customers information, and it then spit back out the offer that could be presented. I’d be interested to know how that algorithm works.

The lesson learned here is that a waste disposal company’s rates are negotiable. I’d been paying an ever increasing rate for years, when I probably could have saved money with a simple phone call. I had never thought that garbage service pricing would be negotiable, but after this experience giving my garbage company a call is now firmly on the list of monthly bills to periodically shop around and make sure I’m getting the most for my money.

How about you Clever Friends, have you called your waste disposal company to negotiate your monthly rate? Do you have any other monthly bills you were surprised to find out they were negotiable?