Is There A Statute Of Limitations On Complaining? 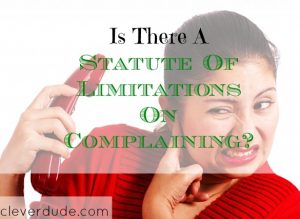 My wife hung up the phone and declared, â€œI am getting my hair colored for free today.â€ She had that smirky smile on her face that beamed of, â€œI did it again.â€ I smiled back, waiting for the rest of the story that I knew was about to be delivered.

We were attending a charity dinner with my mother and father in law that evening, and my wife had decided that she wanted to look her best for the event. It had been quite a while since she had her hair colored, and some streaks of gray were beginning to show up on her roots. Her first choice salon was all booked up for the day, so she called her second choice.

They had an opening, but as she was officially booking the time slot, she remembered her last experience there. She asked who her stylist would be, hoping it wouldnâ€™t be the same person that did it the last time. She explained to the receptionist that the last time she had her hair colored the gentlemen that performed the service had gotten hair color on several place on her face. While it did come off after a day or two, she spent the evening of our wedding anniversary worrying about brown spots on her cheeks and forehead. The receptionist told her that if she came in that day, they would not only make sure that the stylist did a great job, but the service would be complementary.

As she finished her story, the thing that stood out to me was that our anniversary was four months ago.

While I knew my wife had not been happy with the blotches on her face on our anniversary date, I wasnâ€™t sure if I agreed with her bringing it up and expecting rectification four months later. Although, to be honest, the salon did get something out of the way they handled the situation:

I should also mention that as my wife and I were parting ways for her to enter the salon I spontaneously reminded her that even if the service was complimentary, she should still tip â€“ probably even better than if she was paying for the service. She nodded her head and when asked about it later, she left about a 30% tip.

What do you think, was my wife out of line expecting some compensation for her botched hair coloring four months ago? Or is there no statute of limitation on complaining?