If You Have a Teenager, You Need an Emergency Fund 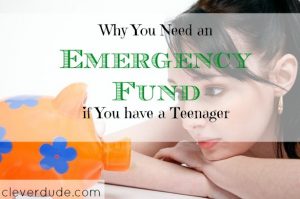 A water heater thatstops running, a car that needs repair, or a root canal are all unexpected expenses that pop up from time to time during this wonderful thing we call life. But I never thought in my wildest dreams of something like this.

On Saturday, my son and I stopped at Target to pick up a few things on our way to our gym to play catch. As we were walking through the isles, he spring this on me:

â€œOh, by the way, I need to wear dress pants, shirt, and tie for our science presentation on Monday.â€

Since he refuses to wear a shirt with a collar unless he absolutely has to, and it’s been at least a year since we’ve attended any kind of formal event requiring one, this meant we were going shopping for an outfit. I wanted to avoid going to the mall, because I didn’t want to shell out a lot of money on clothes that he would likely wear two or three times at a maximum before he outgrew them. We spent a few hours checking out the discount retailers, and pieced together the following outfit:

He tried on the black dress shoes he had. They were a little snug, but he was completely against heading back out on the shopping trail with me, so he said they would work fine for the 90 minutes he had to wear them at the open to the public event.

â€œI have everything typed up, I just need to print it out and put it together. I need a tri-fold poster board, and some colored paper to make it look nice. Oh, and I need to print some things out in color so can you make sure that the color ink cartridges in the printer work?â€

I’m not exactly sure at what point he was going to tell me he needed these supplies, but back to my local Walmart I went:

Over the course of one day, my teenager totaled up almost $70 in unexpected expenditures. He and I sat down and had a nice chat about responsibility, budgeting, and how he needs to let us know about these things as early as possible not only from a standpoint of making sure we have the money to buy them, but also so we have enough time to actually find the things he needed.

If you have a teenager, or a soon to be teenager, I hope you have your emergency fund ready to go.

Do you have a teenager? Have they ever sprung an unexpected expense on you?