I Gave Away My Computer Monitor As Motivation To Declutter 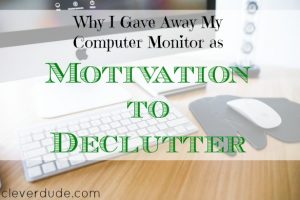 Sometimes you just need a little extra motivation to get something done. I got just such a push when my son came down from his room and asked if we could hook up our 22â€ wide screen high definition monitor to his computer sometime just to see what it looked like.

My son bought his own computer at the end of last summer, but didn’t have enough to purchase a monitor. We had an old one sitting around that he hooked up and declared it would be good enough for the time being. I’ve always wondered why he hadn’t decided to save up for a new monitor. We gave him an upgraded graphics card for Christmas, and the monitor he was using certainly wasn’t doing justice to the capabilities of his computer.

I knew that what he really meant was to do a permanent monitor swap, which was confirmed by the disappointment on his face when I said we could try it, but he should start to save up for his own monitor. I don’t play games on my desktop computer, but I love the brilliance of the screen as well as the size when I’m doing multiple tasks in parallel.

Sitting in my home office, I stared my unopened email list on the screen as well as a small pile of things I have been meaning to try to sell on Craigslist for quite some time. An idea came to me that would benefit both my son and I. I ran up the stairs, knocked on his door and proposed the following to him:

Here’s a list of the items that will be going up for sale:

Three of the four items are technically his anyway, so it seems right that the money earned from selling them should go to him. I’m willing to throw in whatever I get from my old smart phone to help his cause.

Although the monitor he’s now using is really nice, it’s not quite the one he wants. He’s motivated to save his allowance to get one with specifications that are better for gaming.  I’m now using a little square monitor and I want my big screen back. I’m motivated to sell the unused items currently sitting on my desk so I can get my monitor back.  It’s also a great opportunity to teach my son the process of selling things online.

It’s a win/win situation for both of us.

Have you ever sold unused items as a way to fund buying something new that you wanted? Have you ever made a deal with your son or daughter to motivate you both to accomplish a goal?