How Will The IRS 2016 Cost Of Living Adjustments For Retirement Accounts Affect You? 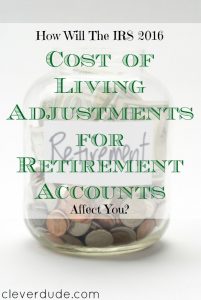 October is drawing to a close, which gets me to thinking about next yearâ€™s budget. The start of 2016 may be over two months away, but Iâ€™ve already received a note from my employer saying that medical coverage information will be released for review and enrollment soon. Also, the IRS announced information regarding the 2016 limits for pension and 401K plan contributions. Medical coverage and how much one can contribute towards retirement are two items that can definitely affect a budget. The sooner I can figure out what those numbers look like and how it will affect my familyâ€™s finances the better.

In 2015, the cost of living index did not rise enough to trigger changes in the contribution maximums for most retirement accounts. Here are highlights of the most commonly applicable amounts:

Contributions to IRAs are tax deductible as an incentive for individuals and families to invest in their future. However, the amount that can be claimed as a tax deduction is phased out as a person, or couple’s income increases. The cost of living index did rise enough to trigger some slight increases in some of these phase out ranges. Here are the highlights: