How To Properly Cool Your Computer System 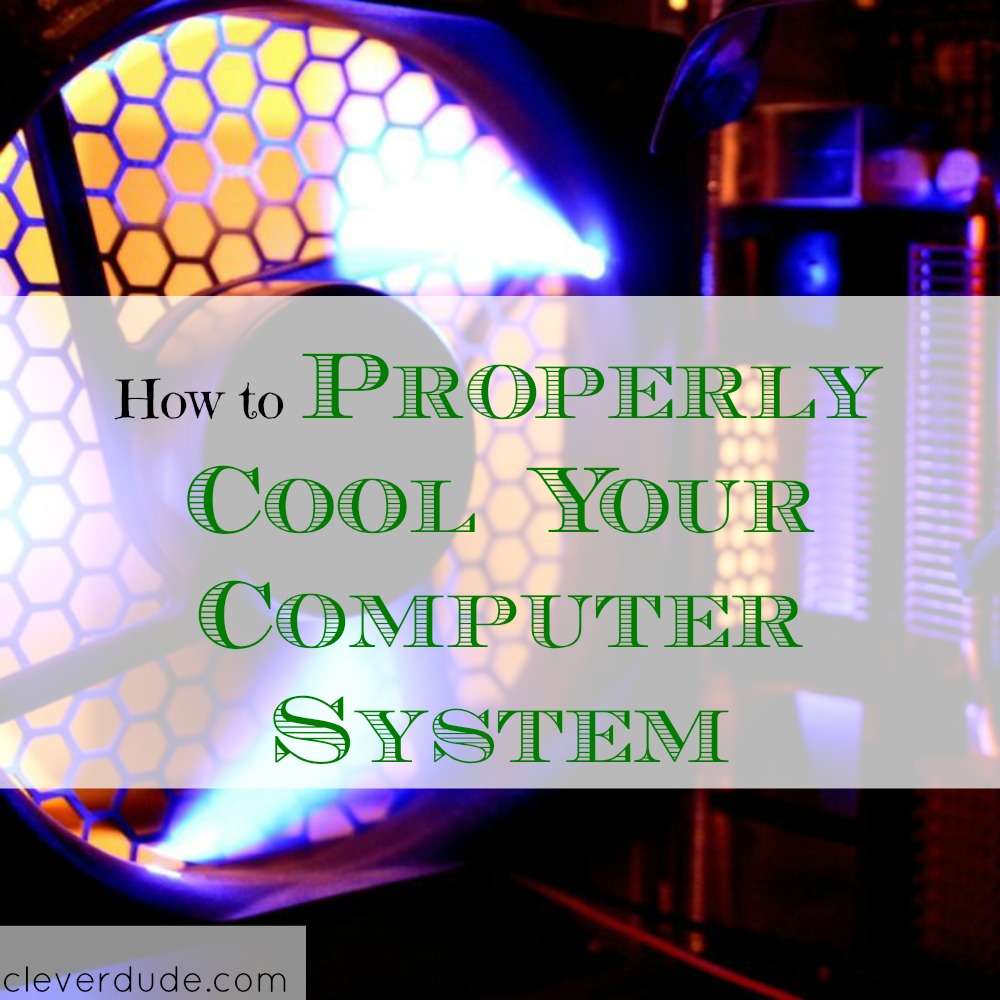 We’re talking tech today here at CleverDude! I’m customizing my computer and need some additional cooling in my computer case. In a past post we talked about selecting the right motherboard, but in today’s post I pass along some of what I’ve learned about computer temperature monitoring, computer fans, and computer cooling solutions.

You could spend hundreds ore even thousands of dollars building the perfect computer, but without the proper cooling and airflow you might catch the smell of burning electronics. Your computer could overheat, ruin some of the components, and become a very expensive lesson.

If you buy a ready to use computer off the shelf, the manufacturer has already done the work for you. But if you build your own computer, add more powerful components, or overclock your processor, you’ll have to implement your own cooling solution using fans inside the computer’s chassis.

How Hot Is It?

Most computers have tools in their BIOS that display internal temperature information for the CPU, the ambient temperature inside the case, or others. This is good information to have, but it is simply the idle temperature of your computer. What you really need to know is how hot things get when the computer is under load, or doing lots of activity.

Free tools such as CPUID Hardware Monitor can be downloaded and installed. These tools will tell users very detailed temperature information while the system is running.

The normal operating temperature varies a little by processor type, but generally speaking you might start to become concerned when your CPU temperatures gets into mid 80’s (Celsius) for long periods of time. This suggests you might want to evaluate your computer’s cooling solution.

My computer currently runs with a CPU temp around 35 degrees Celsius when idle, and 50-55 when under load.  I should note that I have a fancy water cooler

for my CPU. With the current configuration my computer is adequately cooled. But, I’m about to toy around with overclocking my graphics card which will put additional strain on the system and generate more heat within the case.  My efforts to improve the airflow in my case is to help keep my graphics card cool.  Warning: Shameless foreshadowing for future post.

Keeping the temperature down inside your computer is not just about having fans blowing, it’s about proper airflow through the machine’s case. You need to have both intake and exhaust fans.

Intake Fans are used to pull cooler air from outside the case into the computer. Typically an intake fan is placed on the front of the computer. Some high end cases also have intake fans on one of the side door panels.

How many fans you can or need to install depends upon the design of your case as well as what temperatures you’re experiencing inside your computer.

Fans used for cooling a computer are plugged into the motherboard for power and control. There are two different types of connectors to be aware of.

SYS_FAN: The connector into which you will plug your intake and exhaust chassis fans. These fan connectors typically do not support PWM and instead rotate at a constant speed. You may be able to create a fan profile within the system BIOS to increase or decrease the fan speed based upon the temperature of the CPU or system. For example, if the temperature of the CPU reaches 50 degrees Celsius, you can set the fan profile to spin the fan at 50% it’s maximum, and increase to 80% of it’s maximum if the CPU reaches 70 degrees Celsius. You can purchase chassis fans that have PWM control, but this usually requires the purchase of a special piece of hardware called a fan controller and is used by advanced computer builders.

Building your own computer can be a rewarding experience. You have control over your systems configuration and can build a much better computer for your use case for the same amount or less money than buying one off the shelf. Knowing how to monitor temperatures and properly cool your computer is not only a good skill, but a necessity to protect your creation.

Have you built your own computer? Do you monitor the internal temperatures?