How Much Do You Spend On Thanksgiving Dinner? 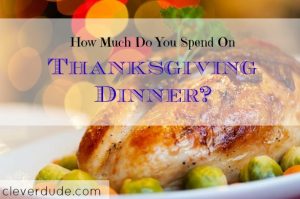 We became friends with a family that moved into the neighborhood from Kentucky.  They’ve since moved away, but for a few years we had a tradition of spending Thanksgiving together since they didn’t have any family nearby. We would have short conversations about what each family would be preparing, but we didn’t put a lot of thought into it. What happened was that each family made an entire Thanksgiving dinner. We would make typical midwest food, and they would bring what you might call traditional southern Thanksgiving food. The result was a fridge worth of leftovers.  Eventually much of the food was thrown away because nobody could eat that many leftovers before they went bad.

We take a much more minimalist approach to Thanksgiving these days. This year we’re hosting Thanksgiving for my immediate family, my brother and his family, and my parents.  Here’s what our menu looks like this year:

There are endless other combinations of traditional thanksgiving food that could be added or substituted. These are the items that represent Thanksgiving to me. No more, no less.

How about you, Clever friends, what’s on your Thanksgiving menu this year?