How Much Cheaper Is It to Drink at Home? 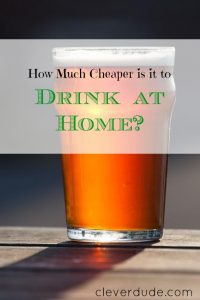 I had a serious case of sticker shock at a bar in downtown Chicago when a bartender told me that I owed $8.50 for a rum and coke.   Iâ€™m from a smaller town where Iâ€™m used to paying half that on the rare occasion we go out.

Iâ€™m the kind of guy that likes to sit on my deck with some friends and throw back a few cold ones or mixed drink or two. I know itâ€™s cheaper to drink at home, but staring at my $8.50 rum and coke I wondered just how much cheaper.

Cost of Rum and Coke Supplies:

I can make my own drink at home for under $1 a drink!

A can of beer at my favorite watering hole runs $4.95. How much would drinking the same beer cost me at home?

I understand why the prices in bars are higher. Youâ€™re not only paying for the drink, the cost of the bartender, the building, the entertainment as well as some pocket money for the owner is all built into the price of the drink. There are certainly reasons why I would go out to a bar and pay higher prices too. Maybe thereâ€™s a band I want to see, or my wife and I decide to go to the local comedy club.

But when you pay for your next drink at the bar, think of this post and remember just how much the bar is inflating the price. You might just end up sitting on your deck with your closest friends instead.