How I’m Using Jeans To Teach My Son About Finances 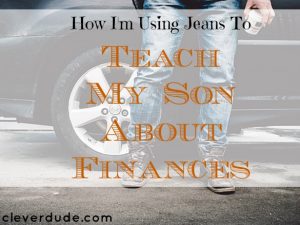 My son is extremely picky about his jeans. I dread going shopping for new jeans with him, because he will pick out, try on, and approve jeans, but then decide somewhere down the road that he no longer likes them. One year I simply gave up and he wore shorts and warm up pants through the entirety of a Midwest Winter.

This year, I thought we finally had found the solution. While shopping in August, we had a very frank discussion regarding brand names, and what jeans he preferred. As an adult that cares nothing about brand names I find it a waste of money. But I do remember the pressures and difficulty of fitting in as a high school student, so I figured I’d cut him some slack.

We purchased five pairs of jeans from Aeropostale, two different styles. He had seen both styles in the store, but they didn’t have his size so we ordered them online. When they arrived, I had them try them on. I purposefully made a huge deal about it.

â€œThey are all approved?â€ I asked.

â€œYES!â€ he responded, rolling his eyes.

â€œHey, you know why I’m asking. Right now the tags are still on them. If you don’t like them, that’s fine. I can return them, and we’ll keep looking. But if you like them, I’ll take the tags off.â€

I took the tags off, and put all the jeans in his dresser drawer.

A few weeks later, on a Monday morning, he came down from his room and asked if I had any of his jeans clean in the dryer. I told him that they had just been put in the dryer, and would not be ready in time for him to wear to school that day.  He would have to wear one of his other pair.

It was at this point I literally pulled out every remaining hair from my head. He had two more pair of brand new jeans he would not wear, and that I could not return. I’ve simply had enough of this. My son periodically shows signs of understanding the value of a dollar, but other times he seems completely oblivious to consequences of wasting money.

There were two things that came out of my son’s latest reversal of acceptance of jeans:

I could have went a little more harsh and required him to pay for his own jeans. But, as his parent it is my responsibility that he has clothes. If he decides he no longer likes a pair of jeans, he will then pay me for the pair of jeans he doesn’t like allowing the purchase of a new pair of jeans he will wear.

Hopefully he’ll put a little more thought into his answer before he says approves a pair of jeans.

Have you had a child that has been extremely difficult with buying clothes? How did you handle it?