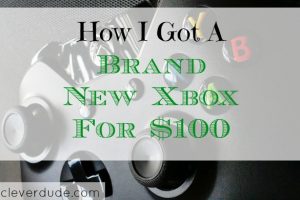 My son had taken his Xbox to a friend’s house the night before. I wasn’t thrilled that he was taking it out of the house, and unfortunately my concerns proved to be valid.

That was earlier this summer, and the game console has sat idle and broken in his room ever since.

I went into his room on Saturday to talk to him and noticed it sitting on his dresser. We started talking about it, and I noted how he had quite a few games as well as an Xbox Live membership that weren’t being used. Nothing had been done about it because he didn’t want to fork over the money to send it into Microsoft to have it repaired. Not liking the situation I offered some financial assistance to help get things working again.

He agreed, of course.

We went to a nearby Game Stop to ask some questions. The diagnosis was the laser in the drive was broken, and it would have to be sent in for repair, as we had feared. The minimum diagnostic charge was about $90 plus shipping to get the console to Microsoft. We were talking over $100 just to have them look at it, probably more to replace the drive.

The employee suggested that maybe we would be better off trading in the broken console:

The price breakdown would look something like this: $149 for a used console – $40 trade credit in for the broken console = $109.

For the same price (maybe cheaper) than sending the console in for repair, we could purchase a used console and get rid of the broken console.

It sounded like a good course of action, but I was concerned for a couple of reasons:

The discussion with the Game Stop employee did spark an idea of my own, however. So I did a little research, made some phone calls, and ended up taking a more creative path:

That would have brought the price of the brand new console to $147, but we didn’t stop there.

Due to some promotions Game Stop was having this weekend regarding trading in pre-owned items, we could either take $52 in cash, or $100 of in-store credit. I talked it over with my son, after which he agreed to the following:

When it was all said and done, here’s the result of our adventure:

The bottom line then is, we paid $100 for a brand new Xbox, and my son simply has to buy some new games.

Which he wasn’t upset about. Big surprise.

Have you ever had a situation where buying something new was your best option?