How Fast Does A Car Depreciate? 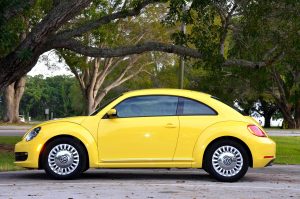 A shiny white car pulled into our driveway, the door opened and my wife’s cousin hopped out. He had just traded in the car he had been driving for several years and had stopped by visit, and to show us his new ride.

I did like his car, but his calling of it an investment sounded funny to me. A common definition of the word investment is as follows:

The investing of money or capital in order to gain profitable returns, as interest, income, or appreciation in value.

Vehicles don’t appreciate in value, they depreciate. My short conversation with my in-law left me wondering however, just how fast a vehicle depreciates.

The rate at which a care depreciates depends upon several factors:

Given a vehicle with a purchase price of $30,000 one would see the following depreciation over the first 3 years:

In total, our new car lost about 42% of it’s value in the first three years.

A car isn’t an investment, it’s a service. You’re buying a convenience service in that you can travel where you want, when you want. That service will cost you. I’m not saying you shouldn’t buy a nice car if that’s how you want to spend your money. But don’t think of it as an investment, think of it as buying a service. Knowing exactly how much that service is going to cost you may help you make a decision as to how much of your hard earned money you’re willing to part with to have it.

How about you Clever Friends? Do you look at the depreciation of a vehicle before you buy it?