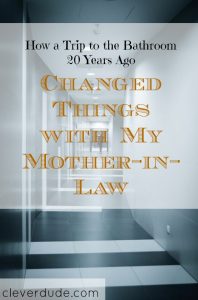 It started out as a joke almost twenty years ago while my now wife and I were still in college.

Her mom would come to the city where we were attending school, and take us both out for lunch or dinner just to catch up on how we were doing. Since we were college students we didn’t have a lot of money so she would always treat us.

One Christmas, I received some gift cards for my favorite seafood restaurant as a gift. The next time my future mother and father in law came to town, I stated we were going to that restaurant, and I was going to treat them. After we were done eating, I excused myself to the men’s room. By the time I returned, the bill had come and was paid for once again by my future mother in law.

They started making jokes insinuating that I had gone to the bathroom at just the right moment in order to avoid the check. We all knew it wasn’t true, and we all had a good laugh over the situation. The joke was used for many years. Whenever the bill was about to arrive someone would ask me if I had to go to the restroom. They my mother-in-law would grab the bill holder and pay.

The restroom incident hasn’t been mentioned for quite awhile, but it’s almost become tradition that my mother-in-law picks up the check whenever she’s present. If we’re ever discussing meeting at a restaurant, my brother-in-law will suggest a nice place, â€œBecause mom’s paying anyway.â€

She always smiles and agrees.

I sometimes wonder if she does it because she really wants to, or if she now feels it’s expected of her .It’s not like we don’t try to return the favor. There’s times I’ll grab the check and even put my method of payment inside the little binder, only to be given, â€œThe Look,â€ and demanded to hand it over to her.

On more than one occasion, I’ve said to her, â€œYou have to let us pay sometime.â€ She looks up briefly from signing the receipt, smiles, and says, â€œYou can buy next time.â€

Only next time never seems to come.

What do you think, did my simple trip to the bathroom twenty years ago start something that my mother-in-law feels she is now obligated to do or is this all in my head? Should I force sharing the burden of the check, or should let it go and enjoy a good thing?