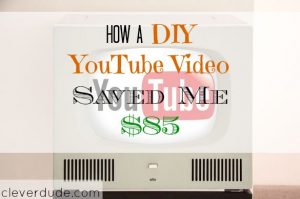 I’m a Do It Yourself kind of guy, and take pride in being open to learning new skills. Increasing the tools I have in my DIY tool belt not only enables me to be more self-sufficient, but also saves me money because I don’t have to pay a professional to do it for me. Sometimes those DIY skills get a little rusty if you don’t use them, as was the case over the weekend.

I was deep in football coma Sunday afternoon, when I became aware my wife was trying to get my attention. She had loaded the dishwasher, but when she started it up, there was a loud buzzing noise. This has happened before, and I paid $85 to have a repair person spend a few minutes removing some parts and extracting a piece of plastic that had become lodged in the blade that grinds up food particles before sending them down the drain. I had watched what the repair person had done, so I instantly grabbed my tool box knowing exactly what had to be done.

Unfortunately, it didn’t go as smoothly as I had hoped.

I knew I had to remove some screws from the bottom of the unit, but after doing so I couldn’t seem to get to the motor housing and blade that I had remembered from the repair person’s visit. After about half an hour and some colorful language, my frustration level was extremely high. Suddenly an idea popped into my head, and I sat down in front of my computer.

I searched for the model of my dishwasher along with the terms, â€œgrinding noise.â€ I found a video that matched my search that was a two and a half minute video of someone doing exactly the same procedure on the exact model of dishwasher that I own. I watched the video, and nodded my head as the narrator explained the removal of one more piece that I had skipped.

Back to the dishwasher!

I quickly took out one more hidden screw, and was then able to remove entire unit from the bottom of the dish washer. The motor housing and blade were exposed, as was a zip tie that must have been left in a cup for some reason. I re-assembled my dish washer and started it up. It ran as quiet as a mouse.

â€œFixed the newel post!â€ I said jokingly to my wife.

I knew what was wrong, and wasn’t going to pay another $85 to have someone remove another piece of plastic from the bowels of my dishwasher. Fortunately there are people that like to share their DIY skills through YouTube videos. I’m grateful that I found the video showing me exactly what to do. It relieved my frustration, got my dishwasher back running, and saved me $85. 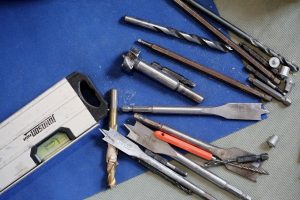