Health Care System Fail : It’s Your Money and your Health at Stake 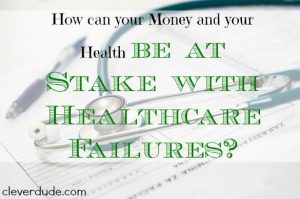 As your stereotypical male, I don’t go to the doctor often. I believe that if given ample opportunity the amazing human body can usually heal itself.  I don’t go for an office visit unless something has been nagging me for weeks, or a body part has ceased to function. My lack of enthusiasm is reinforced by the fact that almost every time I do decide to make a venture into getting some medical treatment I’m reminded of just how messed up our health care system is.

Take my most recent experience as an example.

While I may be reluctant to go to the doctor when ill, I do place a high value on my annual preventative exam. While making the appointment, I was told I should come in and have blood drawn a few days before the physical so the doctor could go over the results with me. I asked if a Prostate-Specific Antigen (PSA) test would be done as part of my blood work. The person I spoke to indicated they would have to check on that, and get back to me.

When a nurse called back, she said that they did not do the PSA as the standard blood work for two reasons:

First, my health insurance DOES cover the PSA test under preventative care. Which leaves the second reason as really the only reason they don’t do the test. I’ve had this conversation with my doctor before. There is no normal level of PSA in a male human, therefore by itself is not a good screen for prostate cancer. My doctor doesn’t like to order unnecessary tests.

However, I know a little about PSA tests because my father was diagnosed with prostate cancer. His doctor also favored a physical exam, and was told everything was OK. My mother insisted upon a PSA test as part of his blood work, and they found that it was elevated compared to a baseline test done a few years earlier. That prompted more testing, and cancer was found.

By itself, a single PSA Test is not very useful. But a baseline test along with a series of yearly results would help signal a problem if the results changed significantly. According to my father’s surgeon who removed his prostrate (highly regarded as one of the best in his field at the Mayo Clinic) the best way to get an early diagnosis of prostate cancer is to have both a physical examination AND a PSA test done yearly.

But thanks for trying to save my insurance company some money at the potential expense of my life.

I simply cannot believe that the best they could do is give me an approximate price. Why can’t they tell me exactly how much the test is? I understand there are prices charged by the medical facility, and then there are insurance negotiated prices. BUT, they have all my information. They should know what their price would be, and given that they have my insurance information they should know what my insurance coverage’s negotiated price should be.

How can I determine if I can afford the test if they can’t tell me how much it costs?

I decided to have the test done. I have plenty of funds in my health savings account (HSA) to cover the fee.

When dealing with health care, you must assume that the only one that really has your best interests in mind is YOU. Doctors will order or not order tests based upon their own subjective opinion. Hospitals and Clinics will brush you off by giving you approximate costs. Insurance companies will make up reason to not cover your expenses. You have to get second opinions, do research, make phone calls and fight for what you know is best for you.

Ugh, and my wife wonders why it’s so hard to get me to go to the doctor. 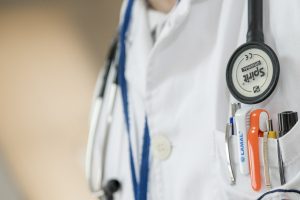