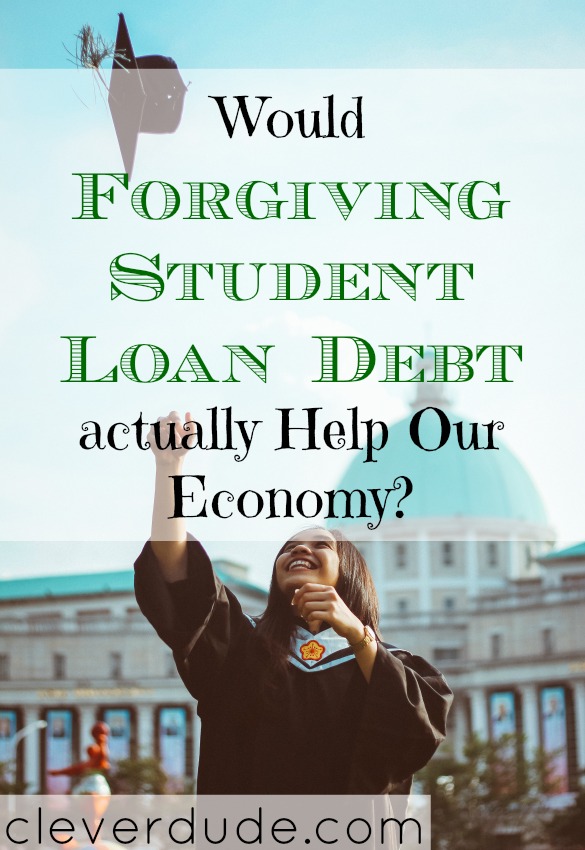 My son might have close to $80,000 in student loan debt by the time he finishes college. That’s a huge debt to be saddled with as he begins his career, and I worry how long it will take him to pay it off. For this reason, I found written by A.P Joyce entitled “Want to grow the US Economy? Cancel student debt, the new report shows,” extremely interesting.

The article is based on the research in a report from the Levy Economics Institute of Bard College titled “The Macroeconomic Effects of Student Debt Cancellation” that suggests canceling all current student loan debt would not only help out those with the debt but the country’s economy as well.

Here’s a key take away from the article:

The report finds that canceling all student debt would likely lead to an increase in U.S. GDP between $861 billion and $1,083 billion over the course of 10 years. It would also lead to an increase of 1.18 to 1.55 million additional new jobs over the same period — that’s about 50% to 70% more jobs per year compared to an average of recent years.

Those are big numbers, so it naturally led me to wonder just how much student loan are we talking about? Luckily, the article answered that question:

This new analysis comes at a time when more than 44 million Americans have a collective $1.3 trillion in student debt — higher than both auto U.S. debt and credit card debt.

Forgiving all current student loan debt would cost the government (and therefore the taxpayers) 1.3 trillion dollars. But forgiving those debts would cause similar growth in our nations GDP over the next 10 years along with a steeper job rate growth. Plus, you just made life much, much easier for 44 million Americans (13.5% of the population) by taking away a debt and a monthly payment!

As the parent of a college student currently accumulating student loan debt, I can definitely relate.  This seemingly puts some hard research behind those that back government-funded college education.  But what do you think, Clever Friends? Is widespread student loan forgiveness, paid for by the taxpayers, worth the economic benefits?