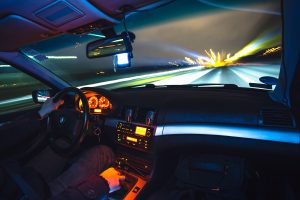 Because of various dangerous driving situations I’ve been in, I make a conscious habit of driving with my sunglasses whenever it is a sunny day. It is a habit for me to leave them in the car. A few years ago, I had a horrifying experience where I was blinded by sun glare. I just crossed a busy intersection, under an elevated train station, and was completely blinded by the sun.

Luckily, nothing happened when I was briefly blinded by the sun and I recovered a few seconds later. However, all it takes is a few seconds for something horrible to happen. I drove down a one-way street once, and a group of teens drove at me the wrong way. We both hit the brakes and almost had a head-on collision. The accidental crash is probably what led the teen driver to begrudgingly exhibit some situational awareness.

The car full of teens backed up, turned, and drove ahead of me the right way. I had never seen anything like it in my life. The last thing I thought about doing was getting out of my car to rage out. Escalation never helps. No matter how imbecilic the other driver is being. The potential for disaster exists in every moment that we drive.

It’s important to remember that you can only control your actions. You can’t control the environment or the actions of other drivers.

All cars should have plenty of driving distance between each other to allow ample maneuvering and stopping time. Tailgating is the practice of a car dangerously following another vehicle, like a front bumper almost touching a rear bumper, from behind at highway speed. Nearly one-third of all car crashes are a result of tailgating. Sometimes the driver being tailgated will tap their brakes to discourage the tailgating driver.

Such actions can escalate into road rage incidents or crashes. Tailgating also makes traffic worse, makes drivers unnecessarily add 5.5 billion more hours to travel time and waste almost 3 billion gallons of fuel every year. Tailgating costs Americans almost $121 billion a year. If people stopped tailgating, and always drove at safe, fixed-distance speeds from one another, each driver would cut their travel time in half.

Getting angry and escalating the situation helps no one. If another driver is tailgating you, pull over, stop, and let them pass you. Don’t ever tap the brakes. Being in the “right” is no consolation after a deadly wreck or road rage incident.

Deer Jumps in Front of Your Vehicle

Stay calm and don’t panic. Firmly grip your steering wheel and apply the brakes. Never swerve around the animal or into another lane. The animal could follow the path of your car and cause a collision. Or, you could hit another vehicle in the other lane or run off the road.

Never drive through water if it looks to be more than 5-inches high. Your vehicle could be swept away by a current. Or, you could flood out your engine. Unless you have a highly elevated off-road vehicle or SUV, you are better off finding another route.

You can’t control your driving environment or the behavior of other drivers. Always remain calm, maintain situational awareness, and rely on your training as a driver. The potential for driving danger does not always have to become a reality.