Could You Cancel Cable To Get A Better Rate Offer? 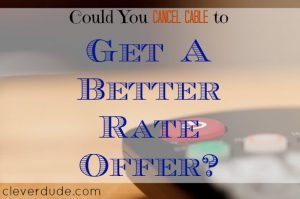 My neighbors were expecting the letter from the cable company indicating their promotional rate period was about to end, and their monthly rate was about to increase. They did what we all have been trained to do, they skipped threatening to cancel cable,and just called the customer retention department immediately. They explained their situation, and stated they wanted to keep the cable package they had, but wanted to be put on a new promotional period such that their bill would not increase.

This is how the process has worked for years, but this time it didn’t work.

My neighbor argued, pleaded, and even called back several more times to no avail. While they like cable, and wanted to keep it, hey were adamant that they were not going to pay the increased price as they felt it didn’t provide enough value.

But were they really ready to take their family, which included two teenage daughters, to a lifestyle without cable?

My friend investigated all the potential less expensive alternatives including an antennae, Amazon Prime, Netflix, and Hulu. It was at our kitchen table that my friend told his wife that if they invested in the equipment needed for that alternative solutions they would be committing to never having cable again.

A week later, they triumphantly proclaimed they had done it. They had given the cable company a virtual fist in the air and canceled their cable subscription. Instead of buying expensive equipment and fully committing to a life without cable, they subscribed to Amazon Prime just to get their toes wet. Each time we saw them, they spoke of binge watching some new show they had found.

Life without cable seemed to be going well.

A few weeks later, my wife’s phone chirped along with the display of a new text message from our neighbors. It jokingly stated not to be alarmed when we saw a cable company truck in front of their house the upcoming Monday. After their cable had been cancelled for about a month, they called back and asked what they could do for them if they came back.

The cable company caved, and offered them a sweet package for a year.

The lesson here is that our cable company has changed the rules. We can no longer be on a perpetual cycle of threatening to cancel at the end of a promotional period if they won’t offer a lower rate. You might have to be prepared to actually walk away from cable for a short time to save some money.

Could you do it?