My neighbor mentioned a few nights ago that on his list of things to do for the evening was to take a look at their water heater. Apparently it wasnâ€™t working, and they had no hot water. My neighbor is the kind of guy that will take a look at pretty much anything before calling a repair person, and his wife had given him that evening to do so before she called a professional the next morning. 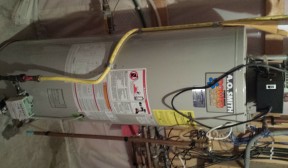 He described to me how his water heater was acting:

I had the exact same issue with my water heater several years ago, and with some additional conversation we determined that we have the exact same water heater. Recalling my experience with this problem, I told my neighbor that we paid the $80 fee for a service call to have someone come to our home and diagnose the problem.

My wife and I both rolled our eyes as I told the story of how the professional fixed our problem. He had opened the service door at the bottom of the water heater, pulled out a piece of sandpaper, and rubbed down the end of a thin metal pole that ends up in the middle of the flames when the ignitor fires.  He explained that the end of the pole gets dirty and the heat sensor no longer senses that the burner is successfully lit.

He was done in less than five minutes.


I could tell he felt bad about charging us $80 as he showed me what he did just in case the symptoms resurfaced.  Eventually no amount of sanding would fix the problem and the sensor would have to be replaced, but this would get us by for a while.

We actually went almost two years before we were forced to replace the sensor.

My neighbors looked at each other and shrugged, thinking maybe they had a chance of having hot water yet that evening. The next morning, I found out that they had tried my suggestion, and it worked. Hot showers were taken by all, and no service call needed.

It felt good to share some information that saved my neighbor some money. Iâ€™m hoping he returns the favor, as heâ€™s infinitely more handy at fixing things than I am.

Have you ever shared information, or taught a friend or neighbor how to fix something to save them money? How did it turn out?